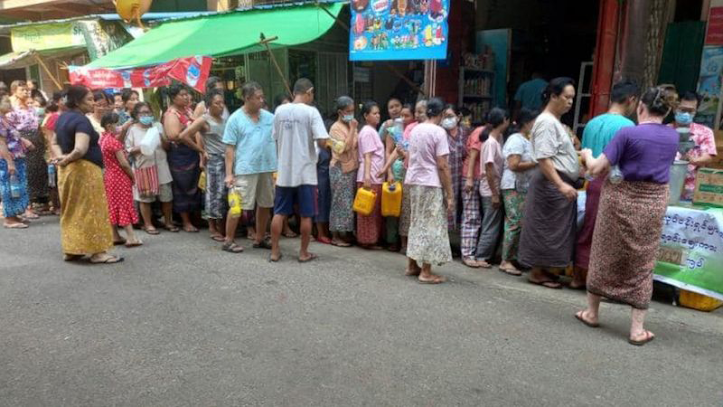 The military government is cheaply selling food products- eggs,oil,rice  to the people of Yangon in about 5 places. There are long queues at the marketplace for food. It is sold in the east of Yangon, people from the west of Yangon also come to buy it in line.

There are conditions of shortage, unfairness , poor management, so the grassroots who had to stand in a queue for hours to buy food can turn into angry mobs at any moment. We lost sleep because the regime, which is falling on all sides, will take a chance of this situation to abuse the public.

In the morning, I wake up with terrible, worrying and bad news.

I got information, the day before yesterday, artist Htein linn and his wife Vicky Bo Minn were also sentenced to one year in prison.

In the marketplace the groceries were closed, I have seen. The wholesalers stop distributing and the shops have  nothing to sell.

According to the newspaper, there are reports that the military government sells one-kyat-gold coin (16.33 grams) for nearly 30  lakhs Myanmar kyats.

The gold price fell down for a while.

Soon after questions about how many gold coins they have for sale, the price of gold rose up again.

One of my friends, Ko Aung, said that the junta managed for his group to easily carry it to the third country .That is possible. The information I got on the democratic radio said  that a large amount of money from high-ranking officials and the upper-class close to the junta has already reached third countries. Ma Yi May, one of ex military officer’s daughters who I know, posted on Facebook clearly ; her wealth had carried on being in a third country safely.

What are we going on? What is happening in our country? I don’t know anymore.

How to estimate the economic situation of Myanmar. I don’t know anymore.

← Daily Local News In Brief – August 30, 2022 (Evening)
What are the reasons for the depreciation of Myanmar Kyat? What will be the consequences? →