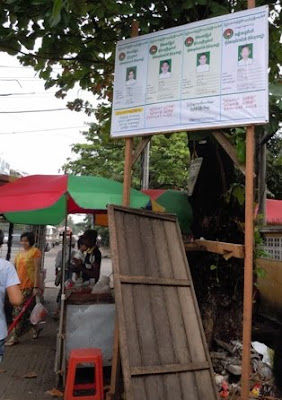 It was reported that some of the high rank officers from government services in Rangoon had ordered their staffs to check their voting status, register to vote and vote without fail on the polling day.  They were told to volunteer themselves doing data-collection and running errands at the polling station when needed. They also were told to report their activities back to their supervisors.

END_OF_DOCUMENT_TOKEN_TO_BE_REPLACED 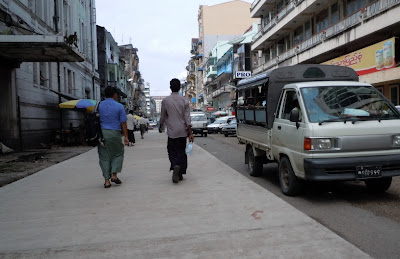 As an election campaign promise, Rangoon Mayor, U Aung Thein Lin who runs for 2010 Regime’s Election as USDP candidate, was promising road repair projects in Rangoon. He was accused that he was misusing city’s fund and resources to finance his campaign’s promise.

One of the residents from Tarmwe Township, told MoeMaKa that the mayor was asking for more recruits to his party while he was holding road work project as a bargaining chip to the local residents.

END_OF_DOCUMENT_TOKEN_TO_BE_REPLACED

Burmese communities in United States of America from 14 cities and towns announced: “We do not Support the Burmese Military Junta and Its Cronies. We Protest and Condemn the Junta‟s 2010 Election & Pre-determined Outcome”, in their solidarity statement dated 20th October, 2010 (20-10-2010). They also urged the Burmese and democracy activists around the world: “Please share the news and let’s join hand for next action – “Global Protest Campaign against Burmese Regime’s Unrepresentative Election 2010″”.

According to the statement received, it expressed the followings:

END_OF_DOCUMENT_TOKEN_TO_BE_REPLACED 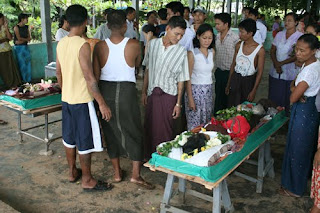 The Grim Reaper knows no laws

Ms. Than Myint Aung, secretary of Free Funeral Services Society (Yangon), and the staff members helped transport the bodies of Daw Ohn Yee (age 67) and her son U Khin Oo (age 48) from South Dagon township, Yangon for cremation at Kyi-Su cemetery at 9:30 am, 7th October 2010 on Thursday.

END_OF_DOCUMENT_TOKEN_TO_BE_REPLACED 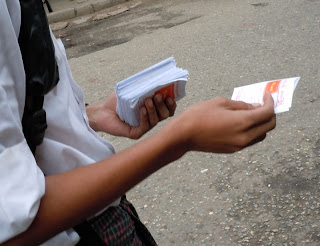 Many campaign leaflets were seen distributed by political parties at the bus stops and public places only 24 days before November election of Burmese regime.

According to local residents from Kyauk-ta-da Township,

“The leaflets were still handed out near Pan-soe-dan bus stop, for candidate of 88 generation student (Union of Myanmar) contesting  at constituency of Kyauk-ta-da Township, yesterday evening …”

It surprised some of bystanders and passerby and they seemed more ridiculed when they saw the symbol of the party which was similar to the fighting peacock from the flag of Burmese students  union.

END_OF_DOCUMENT_TOKEN_TO_BE_REPLACED 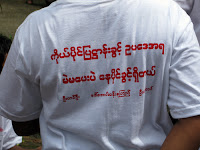 According to the news from Nay Pyi Taw, the generals have given verbal orders to harass, prosecute and condemn anyone who act or say anything even a joke against their 2010 November election. “A formal written law and order may be issued if there are many movements to boycott the election. For the present, this is a verbal order from upper.” said a service from Nay Pyi Taw.

A monk from Mon state and more than ten students were detained for distributing the anti-election statements. Such news had emerged for the past few months. Political activists throughout the country feel that it is improper and unethical to vote in the 2010 election because the underlying laws are flawed and unjust.

END_OF_DOCUMENT_TOKEN_TO_BE_REPLACED

Photo News October 13, 2010 Art Master U Lun Kwaye’s paintings will soon be on exhibition in Grand Railway Hotel. Together with his, the painthings of his whole family consists of Lun Mya Mya (his wife), Lun Thit (his son),…

END_OF_DOCUMENT_TOKEN_TO_BE_REPLACED 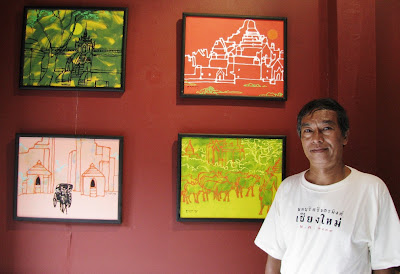 Pe Nyunt Wai, renowned Burmese Artist is going to host his 5th art exhibit opening from October 16, 6 p.m. in Chaing Mai, Thailand. This is his 5th one-man show but this will be the first hosting overseas and it will last for 3 weeks. His collection named as “Bagan Drawings” will be paintings on Pagodas and scenes of Bagan, a historic ancient city of Burma. His sole attention is to express how rich the cultures and traditions of his home country, Burma, the artist said.

END_OF_DOCUMENT_TOKEN_TO_BE_REPLACED 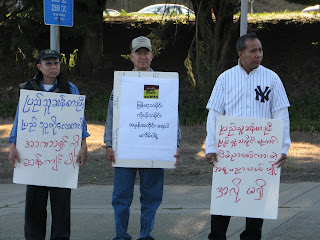 (Burmese Protesters against Burmese’s Stage Show in SF on 25th Sept 2010)
Among the 10 Burmese performers was actress Wyne Suu Khine Thein who performed in the Junta’s propaganda film (Lotus at Dawn – Ar Yon Oo Ma Poo Thi Kyar). The film disregarded the Burmese struggle for democracy in Burma and portrayed it as acts of anarchy and violence.