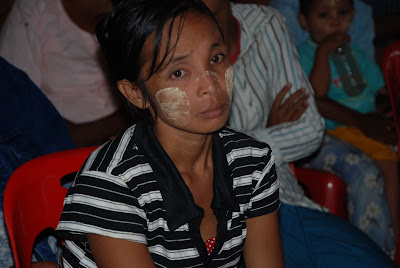 So many things including human being in Burma have been reaching in hands of the junta for long time. Many people taken part in movements for democracy and rights are accused by junta’s official and convicted of various reasons such as attempts to deteriorate state security, made confrontations to the junta’s ideology and criticising the junta’s actions as persecutions on its own people. In the present days, more than 2000 people are behind bars for various reasons mentioned above.

END_OF_DOCUMENT_TOKEN_TO_BE_REPLACED

The former leaders of Kachin and Mon cease-fire groups, and their decision to establish political parties and participate in 2010 election were praised by a political article in Burma’s state-run media. By pointing out two cease-fire groups, Kachin Independent Army (KIA) and military arm of New Mon State Party (NMSP), the article eulogizes that the groups have chosen the best, the most appropriate, and the safest approach. The article also makes a comment that other cease-fire groups will also discuss, negotiate and cooperate to do so like KIA and NMSP.

Author of the article in state-run media is Kyaw Ye Min. As usual habit of the state-run media, there is no introductory about who author is, but aims and contents of the article could be recognized as junta’s opinions. The author said the planning to transform cease-fire groups into Border-Guard-Forces and keep under Commander-in-Chief of Defence Services is good to the groups. He also makes a comment that the state, the junta will take full responsibility and accountability to cease-fire groups’ own properties and personal security matters. At the present days, there are 17 major and 20 minor cease-fire groups in Burma.

END_OF_DOCUMENT_TOKEN_TO_BE_REPLACED

A coffee shop located in Bahan Township in former capital of Burma, Rangoon was torn down by Burmese military Major who is taking responsibility for personal security of junta supremo’s grand-son and the Major was instructed to do the act by the grand-son ‘Po-La-Pyae’. The event was happened 3 weeks ago and the coffee shop was immediately closed down after the event. Now the coffee shop has been totally demolished in last week.

END_OF_DOCUMENT_TOKEN_TO_BE_REPLACED

#fullpost {display:none;} On FaceBook, the junta might have million friends, but in reality check, he has none outside. (Cartoon Maung Yit) Sept 11, 2009