END_OF_DOCUMENT_TOKEN_TO_BE_REPLACED

It was announced that there would be Donation Ceremony for 100 Monks at Yay Kyi Township in Delta Region on 23rd April 2009. The donor was to be U Zaw Zaw from Myanmar Soccer Association.

However, U Maung Maung Tin (General Secretary of local Pyi Khai Phyoe aka Kyant Phont, a Burmese military regime’s instrument organization), U Htay Naing (local official from Township’s municipal office) and other local authorities issued an order to all the local residences in the area which encompassed of 99 villages to setup tents and stages in the designated football field.

END_OF_DOCUMENT_TOKEN_TO_BE_REPLACED

Burmese Thingyan, the traditional festival for Burmese New Year – Water Throwing was coming near. One of the tradition of Thingyan, having “Thingyan Vase”, a pot full of flowers and branches of plants representing 7 days of a week was still embraced among our Burmese. This year said by the Astrologers that “Thursday-Born” were to be the ritual object of this year Thingyan so we had to buy two “Thingyan Vases” if we had Thursday-born in the family. It cost 500 Kyats each but in reality, the actual price was only 300. Some were selling collection of flowers and braches representing 7 days of a week without a Thingyan Vase only asking around 200 Kyats. And it was selling fast and popular too. There was no sign of season flower of Thingyan called “Paduak” even though there were some rains.

END_OF_DOCUMENT_TOKEN_TO_BE_REPLACED 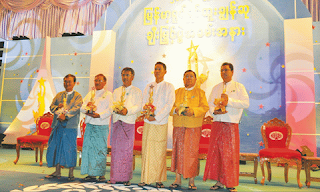 Burmese Academy Award, not for the “Lady”

At the Burmese motion picture academy award ceremony, all the Burmese audience was interested. They were eagerly locking on the live TV broadcast to see who would win according to the rumors outside and also enjoying the sight of dresses and fashions of the stars. Some were even speculating on the screen that who might have the chance according to the way they dressed.

It was hosted in “Nay Pyi Daw”, a very remote far place, a said-capitol of Burma. Some pitied the stars for their trouble to go there. It was hard to say “No” for that kind of great ceremony.  Our audience knew that the stars behind their head, they might be wishing for the Academy Award ceremony to take place in Rangoon.