US keeps quiet about the detail of Nyi Nyi Aung 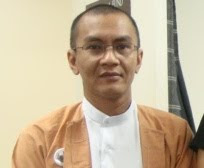 At regular press conference, the US Ministry of Foreign Affairs personnel confirmed that they had contacted Burmese authorities and made inquiry after getting news that Burmese American Ko Nyi Nyi Aung was taken into custody at Rangoon International Airport.

In response to a reporter at the press conference, Ministry of Foreign Affairs’ spokesperson Mr. Ian Kelly said that their consular was trying to see Ko Nyi Nyi Aung. But Ian told the reporter that he could not say details about Ko Nyi Nyi Aung’s case according to law and regulation of US.

His friends informed the US Embassy in Rangoon about him that he left Bangkok at 6 PM, 3rd of September. Ko Nyi Nyi Aung, 40-year-old Burma born American citizen, got valid visa for that visit from Burmese Embassy in Bangkok.