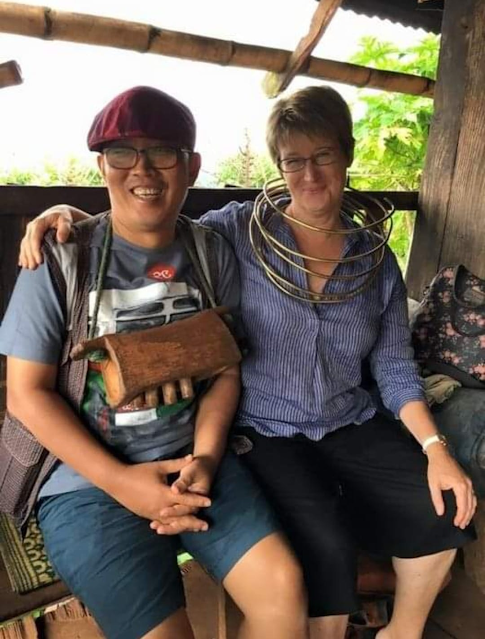 This morning, the news of the arrest of artist Htein Lin and his wife Vicky Bo Min is spreading on the Internet.

Before this news spread, the information that people were interested in the two companies owned by the son of the coup leader, General Min Aung Hlaing, had been blocked by the UK government.

While I heard the news, I got a big shock.

Burmese people said that the case, the act of arresting the painter and his wife, is kidnapping  and that is the character of the junta. They are used to it.

It was cloudy all day. It rained a little in the afternoon.

I carried  an oil painting , a picture of a Myanmar woman playing harp, by taxi to the buyer.

Taxi driver agreed to pay ten thousand kyats for this trip to the center of the city. According to the driver, the price of gasoline is already over ten thousand per gallon. There are very few cars on the road.

I noticed that there are very few cars at the traffic light, where there are usually traffic jams. I guessed that the news my friend phoned me in the morning was true.

It is reported that India is buying fuel from Dubai instead of Russia. IN response to Western economic sanctions, Myanmar had been prepared to buy fuel from Russia through India .

However, it seems that the Burmese regime is facing trouble buying fuel from Russia through India now.

The taxi was stopped in front of the nursing home near Shwe Gone Daing Bridge by two traffic policemen who checked the car’s license.

The police officer holding the license card,  asked the driver for money to pay for the beer instead of the price of a cup of tea.

Driver paid a five thousand note. He didn’t accept it. Driver gave the policeman a ten thousand note. It was OK  on the spot. All the way, the driver kept shouting at the traffic police and cursing the regime, he got up to speed and drove violently.

Under the rolling dark clouds, Yangon  has difficulty in breathing  like other cities across Myanmar.