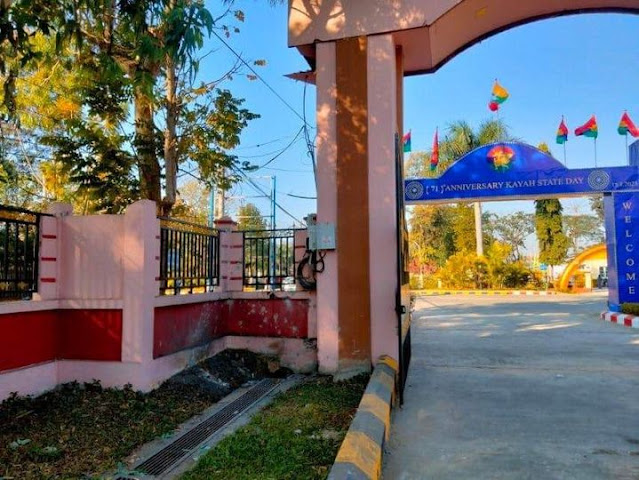 On January 15, an armed group believed to be the local PDF armed force attacked the Kayah State Day ceremony organized by the SAC with heavy weapons and drones, killing 1 and injuring 8, according to reports released by the military council.

On January 15, which had been celebrated annually as State Day, named after the day Kayah State, also known as Karenni State, was approved to form a state, groups believed to be PDFs attacked a ceremony held by the military council near the state hall in Loikaw.

Some human rights organizations criticized the attack on a place where many civilians gathered, saying that it should not have been done. To not recognize and oppose the State Day ceremony organized by the military council is true, but it is seen as something that should not be done to attack a place where civilians are participating.

The military council accused the KNPP and PDF forces, but a KNPP official told RFA that they did not instruct the bottom forces to carry out such an attack. The human rights promoting and human rights violation monitoring organizations are of the view that shooting and attacking such a crowded place, where a large number of people are participating, is not in line with military ethics.

It is true that the PDF forces intended to attack the ceremony, which was attended by Union Ministers, Deputy Ministers, State Chief Ministers, and military commanders from the military council, but they did not have the technical weapons to hit the target precisely, and many civilians were at risk of being killed. Kayah State, which has a population of a few hundred thousand and a small territory compared to other states, has strong armed organizations, and ethnic armed groups KNPP, The Karenni Nationalities Defense Force (KNDF), which emerged after the military coup, and other small PDF forces are operating in the state’s areas as their controlled areas. As a military council, it can only control Loikaw, some towns and military bases in Kayah State. Fighting is also frequent, and Kayah State is also the state with the largest number of refugees fleeing the war in terms of population. It is also an area where nearly 50 percent of the population is fleeing the war.

Another piece of news for today is the news that Muse-Meng Wein Gate has reopened. After nearly 3 years, Muse-Meng Wein Gate, which has been closed since the Covid disaster, has reopened. It is an important border gate in the border trade between Myanmar and China and was closed by China after the outbreak of the Covid-19 pandemic. After the abolition of China’s “zero Covid” policy, restrictions on border gates have been released and some gates have been reopened.

Myanmar’s agricultural products, marine products and other products are being exported through the China-Myanmar border, and the farmers in Myanmar are quite dependent on the Chinese market. Rice, watermelons, cucumbers, mangoes, sugarcane, bananas, etc. are grown and exported seasonally and year-round. The farmers who grow these crops are hoping that they will be able to get their products back to market and have buyers after the re-opening of the Chinese border gate.

On the other hand, they are evading armed conflicts, military council raids and killings, and young and middle-aged workers who can work for agriculture are leaving for neighboring countries and some foreign countries, so there is a difficult situation for agricultural production.

← Election enumerators were attacked and killed once more; Villages in Sagaing Division where residents were still fleeing the war
The action of the military council, which has been arresting CDMs consecutively; A more than 100-year-old Catholic Church was torched →