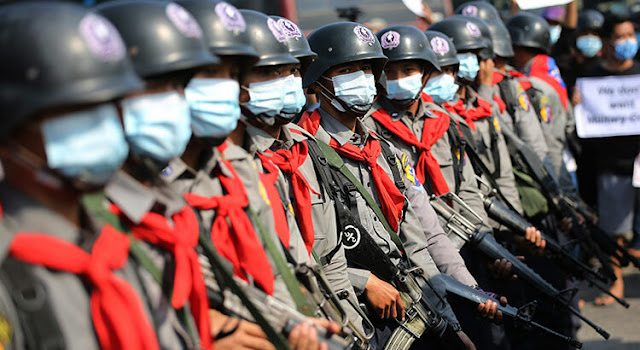 Election enumerators were attacked and killed once more; Villages in Sagaing Division where residents were still fleeing the war

In today’s news, it was reported that a total of 4 people were killed in an attack by PDF groups on enumerators for the election to be held by the military council, in 2 places of Kyaikto and Thaton Townships of Mon. The incidents happened in Kin Mon Chaung Village in Kyaikto Township and Taung Sun Village in Thaton Township.

Since the military council has spoken of the issue of the voter list as an excuse for vote fraud in the 2020 election, it can be assumed that the voter list for the upcoming election is being prepared to be as close to the real data as possible. In a country like Myanmar, which has many weaknesses inside the governance gadget, due to the fact that it cannot be systematically recorded with the digital system and the PC device, it has no longer been able to file and manipulate population registration files, births, deaths, and people working and residing overseas with the digital system. In such a situation, there is still a long way to go to be able to check the correct list of eligible voters and whether or not they voted more than once during the election by computer.

Therefore, it can be concluded that this on-the-ground enumeration of the voting list is just an act to support the military coup on February 1, 2021.

In addition to this perspective, as the military council, the use of manpower and security forces to collect the list of those eligible to vote and the census of the ground population, will be a test of the administrative mechanism of its governance. It was said that the end result of the 2020 election didn’t reflect the true opinion of the public because of the voting issue, but in fact, the military council leaders already understood what the real result of 2020 was. Now the voting list enumeration is being used as a political excuse and a political challenge to the anti-military council forces.

On one hand, the people involved in this process are the lowest level administrative staff, volunteers, teachers from the education field, members of fire department, Red Cross Association and some charity organizations.

On the other hand, PDF forces need to be aware of the fact that targeting and killing anyone involved in the process of voter enumeration may imply that they are targeting civilians who are not members of the armed forces.

Although the NUG has already issued a policy that will try to prevent and oppose the election, it will be necessary to issue specific instructions on the matter of killing those who will participate in the process. If not, there may be more killings in each of the areas, and there is a possibility that the killing of civilians involved in the enumeration process will emerge in addition to the Dalan clearing operations.

Another piece of news for today is the news that some villages in Pale Township of Sagaing Division are fleeing because of the invasion of military council troops. Locals in villages of more than a dozen townships in Sagaing Division have been fleeing simultaneously or alternately for the past year, with their houses and food being destroyed in arson attacks, and their family members losing their lives. These incidents are still going on, and it is not yet possible to stop them.