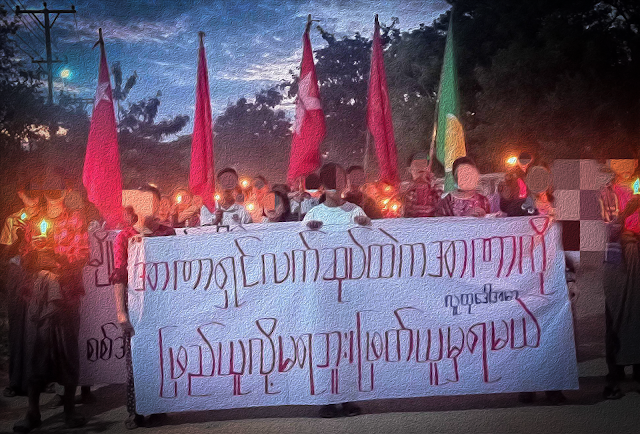 Power outages in Myanmar’s urban areas are becoming more severe. People who are in need of relaxation say they are feeling more stressed by the devastating power outages than relief from watching the World Cup.

Those displaced from the war in the border region, the ethnic areas and rural areas where war is raging, rely on mobile phones and the Internet to watch football matches. There are people who say that the lives that they enjoyed watching the World Cup soccer match in Myanmar 4 years ago are now going through a series of tough adventures with twists and turns and, there is no more passion to watch football.

It must be said that the NUG government is always issuing words of encouragement for Myanmar, which is in a state of intense war.

Union Prime Minister Mann Win Khaing Than said that the revolution must be ended quickly so that the people are not harmed anymore. The prime minister said this at the 76th government meeting of the National Unity Government held on November 29.

“As the military activities increase, I am deeply hurt by hearing the news of people being harmed and people’s comrades losing their lives. Every time I hear such news, I make a firm decision in my heart. No. (1) is to end the revolution successfully and quickly so that the people are not harmed anymore. N0. (2) is to make the best plans to rehabilitate the people who have suffered physically and mentally when the revolution is over,” he said.

At present, we read repeatedly in the news that the National Unity Government is preparing and implementing a one-year strategic plan to launch offensives in addition to the military fronts.

After reports of an informal cease-fire on the Rakhine front, reports indicate that the transportation routes between cities and rural areas in northern Rakhine State are still blocked.

On the night of November 26, the Rakhine-based DMG news agency’s question about the informal ceasefire with the military council was answered by Rakhine Army AA Spokesperson U Khaing Thukha saying, “We agree to a humanitarian ceasefire that the people of Rakhine are currently facing. There is no change in the rest. The original political position is the same.” However, it can be said that the ceasefire will not be effective for the people until the military council’s blockade is released.

The military council is still carrying out offensive operations according to the plans they set. Therefore, the fire of war has spread to the Kokang area as well. The Myanmar National Democratic Alliance Army-Kokant (MNDAA) and the military council have been fighting for 3 consecutive days in Chinshwehaw, Kokang Self-Administered Zone on the Myanmar-China border, the MNDAA has reported. It is also said that the battle took place when military council troops attacked a Kokang camp in Chinshwehaw on November 27th, 28th and 29th.

While the civil war in Myanmar is waging more and more, the people of Myanmar, both domestically and abroad, are still trying to hold fundraising events to raise money in various ways and support the NUG’s defense forces and the local PDF forces. Fundraising projects organized by MOPFI of NUG (Ministry of Planning, Finance and Investment), such as NUG Bond, Spring Land Sale Investment and NUG Pay, are still gaining acceptance and support from the Myanmar people. The NUG constantly claims that 95% of the funds received from donations are spent on defense. Until now, without foreign aid, the people of Myanmar at home and abroad have participated in the Spring Revolution, providing financial, physical and intellectual effort.

It is an undeniable fact that the people who want to successfully end the revolution as soon as possible are the Myanmar people themselves.