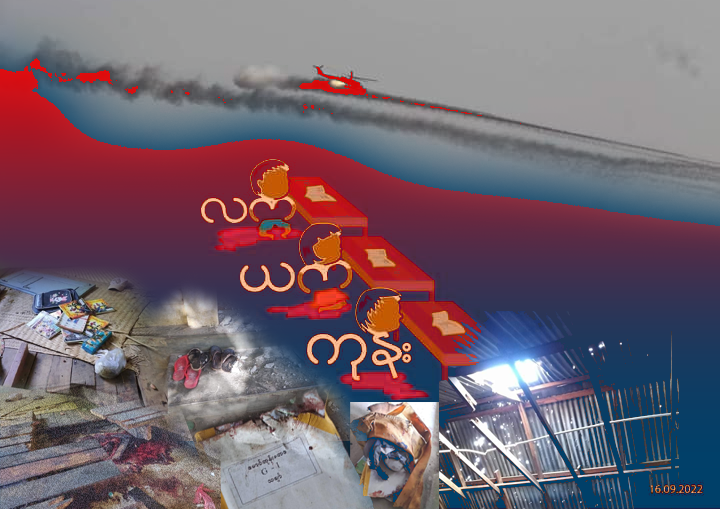 The news of battles, killings, arrests and deaths in the townships of Sagaing was a little bit silent last week. But on September 17, 4 children from a school opened in the monastery compound of Let Yet Kone Village in Depayin Township were killed due to the military’s incursion and firing. On that same day, an incident occurred in Taze Township in which military council troops entered Oakpho Ai Village, committed killings and about 10 villagers lost their lives.

After the military junta arrived in a helicopter and opened fire, they entered the village and did the arrests and firing. Due to that, 6   children from a self-help educational school opened at Dhamaramsi Monastery in Depayin Township were killed by bullets. It is not clear yet why the military council targeted the self-help education school, but it is undeniable that it is a war crime in which the lives of 6 children students who are not adults, are lost.

Firing a school and children at that school until they lose their lives is an unforgivable incident, regardless of the reason, and it must be said that it is one of the most serious war crimes committed by the military council. As the military council has committed such crimes more than once, they will probably think that they are not particularly guilty. However, these events will deepen the public’s resentment and make the PDF more powerful.

Most villages in Sagaing region have organized village-specific or regional defense forces, but they are not yet in a position where they can prevent the entry of military council troops from the ground and air. The military council troops had previously only entered from the ground, but due to the mines being set, they later tried to get information and came from the air to shoot and raid. Also, in the Yin Paung Tine village incident that happened a few months ago, there were deaths and destruction in the air raids of the military council after receiving information about the Chin defense forces taking a break at that village during their trip.

Lately, the military council has been conducting more attacks when they get information and when they think it is certain, by using the air force to fire and by dropping troops from helicopters to raid, rather than searching and attacking the PDF forces from village to village by ground. It is assumed that this tactic has been changed because there were so many casualties with the previous tactic used since the end of last year and the beginning of this year.

In areas like Karen State’s Myawaddy, Kawkareik, Kyainseikgyi, Kyaukkyi and Hpapun, the military council is fighting with the KNU armed groups allied with PDF. There are also frequent battles in Moebye, Pekhon and Demoso as well as in Kachin State’s border regions like Kawlin, Katha and Inn Daw.

Another war front that is currently intensifying is Maungdaw in northern Rakhine State, Buthidaung and Palewa regions. It can be estimated that the military council wants to show that it can hold the whole country with weapons and the view that they can fight in many regions of the country at the same time, so as not to conclude that when they are fighting in one place, they cannot fight in another place.

One thing for certain, after the 2021 military coup in Myanmar, is that the possibility of continuing to maintain within same borders, previously controlled by the military and the state government, has become less likely. Is the future of some ethnic states openly declared confederation? Or, undeclared, but heading for the Confederate States, and it would probably only take a few years to get there.

← Daily Local News In Brief – September 10, 2022 (Evening)
The world’s balance of power landscape and the role of the United Nations  →