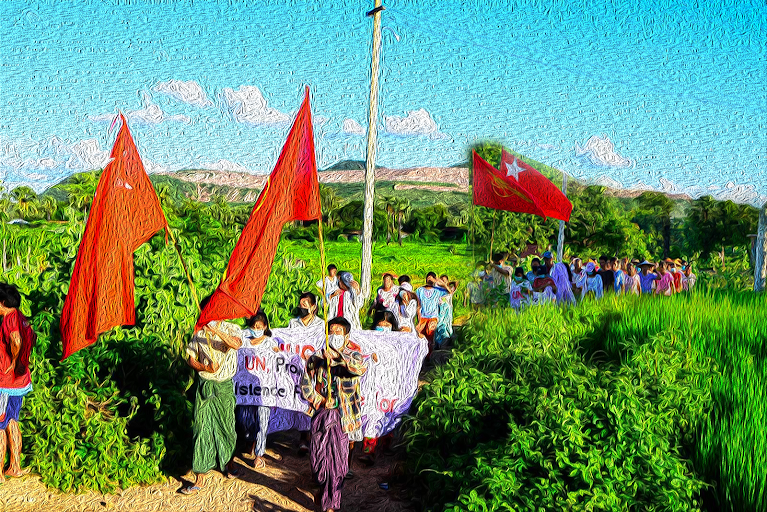 Although it is true that international material aid and moral support is important to a certain extent in Myanmar’s political change and the fall of the military dictatorship, it is also important not to expect more than what is possible and have to understand in the world’s balance of power with interest-centered strategic and tactics.

The world’s political allliance with military support and protection, having communication with friends and foes have changed a lot after the war in Ukraine that began in late February this year. After the Ukraine-Russia war, there have been many changes between the countries, such as differences in the degree of closeness of military alliances, political alliances, and diplomatic alliances making visible of their hidden agenda and interest towards others.

If you ask how these implications are directly related to Myanmar, the Ukraine-Russia war is not directly related to Myanmar, but Myanmar announced publicly its support for Russia’s invasion of Ukraine and directly supported the actions of Russian President Putin. It can be concluded that many of the changes in Myanmar Military’s review of powerful neighboring China towards Myanmar and in Myanmar’s representation at the United Nations are like the effects of the war in Ukraine.

Both the political forces in Myanmar and supporters of the armed forces are interested in the issue of whether or not U Kyaw Moe Tun, who continues to be recognized as Myanmar’s representative at the UN General Assembly currently being held, will be retained. At this time last year, at the Security Council and the country’s representative committee, the United States, China and Russia had some common views on the Myanmar issue and agreed to keep U Kyaw Moe Tun, who did not pay loyalty to the military council, as the UN representative. This fact has been encouraging domestically in terms of diplomatic spirit. This year, China and Russia are on one side and the United States is on the other side, so it is uncertain whether the status quo will continue as it is or not.

In the current Ukraine-Russia war, none of the major countries have taken the role of the United Nations seriously, and they do what they have to do with their own groups. In the Ukraine-Russia war, there was only one issue that the United Nations was allowed to act on, and that was to intervene in the case of ports that were blocked from being able to send food from the Black Sea.

The UN has not been allowed to intervene in matters of other attacks, nuclear reactor control, shelling civilians, human rights violations, war crimes, targeted attacks on civilians, and arms support, and it is seen that no country has seriously listened to the UN’s opinions.

Similarly, United Nations statements and decisions regarding human rights violations, killings, wars, children’s rights, and minority issues, which are happening in Myanmar, did not even achieve anything.

Although some countries urged for an arms embargo on the Myanmar Military Council, a country like Russia, which is a permanent member of the United Nations Security Council, is selling its arms to Myanmar openly. So it is in a position where no one can stop the activities of the country, which has veto power and is also a powerful country.

It is true that the United Nations was established with the full agreement of all countries, but after more than 70 years, it has reached the level of a large international organization for social assistance and relief.

Therefore, it may be said that it is too much if we say whether U Kyaw Moe Tun, being designated as a permanent representative of the United Nations or not, is not as important as the protection of villages from arson attacks on the ground and protection of the lives of children. But, I think that the results that can be grasped from actual events will be more important than the recognized name.

← Let Yet Kone Village, Genocide and War Crimes committed by the Military Council
Feeling of People in Myanmar →