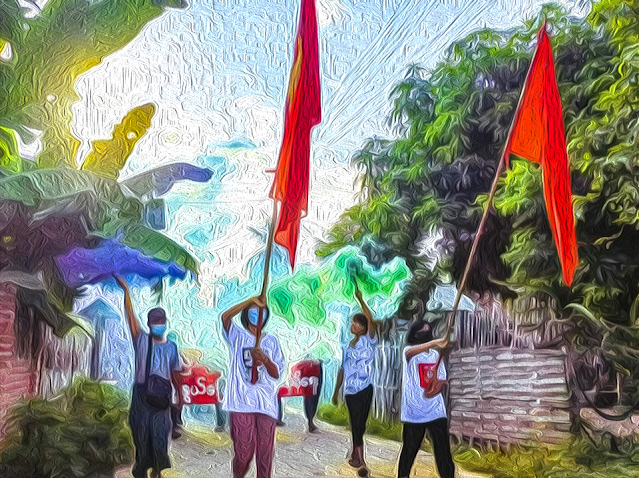 The living conditions and mental conditions of the people in Myanmar are not good. They have to live on their own, expecting the worst. This means the people living in the cities. For residents of some ethnic areas and villages in some divisions, where armed conflicts are taking place and no one can predict when their villages will be raided day or night, or when the battles will take place right where they live, events such as danger of lives from being hit by weapons or bombs, being arrested and killed, starvation due to insufficient food or diseases inaccessible to medical treatment, have become daily life events.

There is already more than one region in Myanmar where transportation of food, medicines, and fuel is restricted or prohibited. In the past, it only happened in places like Paletwa in Chin State, where it was transported through Rakhine State, but now it is happening in Kayah State, Sagaing Division, Kachin State and Chin State.

During the armed conflict, all civilians are restricted from transporting food, medicines and fuel. These areas are in a position where people will be able to move to other areas only if they have enough finances and connections. Most of them are living in their own area, hoping that the danger that is happening in their area will not happen to them yet.

As far as I have heard about a family in the region where the villages of Sagaing were burned and raided, the villages near their villages were raided and burned by the military council troops after entering or passing the village. At the end of June and beginning of July, the worst thing happened to them; their house was set on fire. They were hiding near the village when it was burned down, and after a few days, they went to live in a city after looking at the burnt houses. One of their close family’s lives depending on their children working in the city. And these children arranged for them to rent a house and live as they could. But after a month, they felt depressed and so they returned to their village and set up a tent in their own place that had been burned. I understand the feeling of people who have decided to go back to their village anyway, unable to live in the city for long in spite of arrangements for living there, as their community and their jobs were only in their village.

Compared to them, those who live in cities are in danger, but it is true that it is not like Sagaing, Karenni and the northern part of Magway, where people are in danger almost every hour or every day. For those who live in the city, there are dangers from the military council’s random firing, accidental explosions and shootings, and if it goes too far, there are things that can lead to injury and loss of life, as well as being robbed and killed.

This possibility is present in all cities such as Yangon, Mandalay, Monywa, Mawlamyine, Taungyi and Myitkyina. From the moment they leave the house to work in the morning, knowing that they may face danger. You never know what will happen at which intersection, so there is the risk of being hit by a gun or a bomb. As these events happen frequently, they cannot predict when and where they will happen. They are going out and working with the wishful thinking that they may not face a bad fate.

We hear on the news every day that people who work on city-to-city transportation can be considered dangerous, and people who travel for business, family, and social life, are unfortunately attacked, arrested, and killed.

Even in a city like Yangon, where schools, businesses, offices, companies, shipping companies, restaurants and services are operating every day, robberies, killings, explosions, and loss of life are happening almost every day. Getting injured without knowing that he is being targeted or due to coincidence, despite not being targeted, also happens every day.

Now, unlike in the past, responsibility and accountability for such incidents and the loss of life cannot be specifically stated. There have been hundreds to thousands of incidents where it is impossible to know who is responsible and who did what.

Under this situation, Myanmar people are living a life in which they have to move around and live their lives to pass a day by preparing their minds just for each day. They are also living in an era where no one can know, predict or ensure what will happen next year.

← The world’s balance of power landscape and the role of the United Nations
Daily Local News In Brief – September 11, 2022 (Evening) →