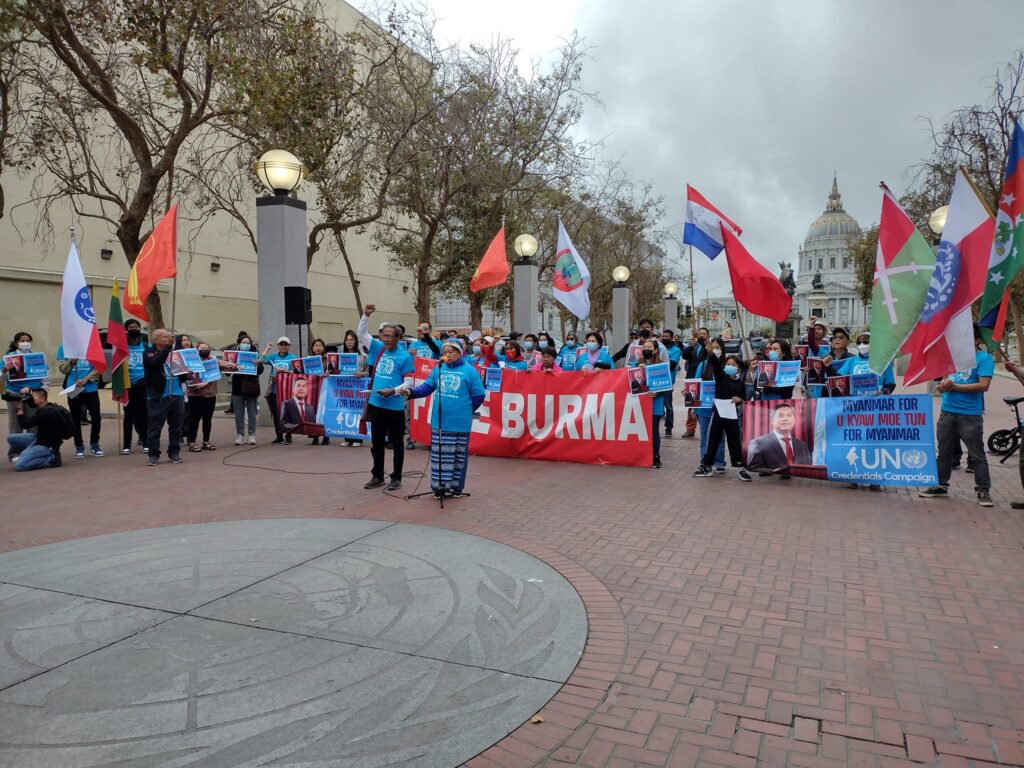 (Made possible with SpringRevPower Team)

In September, U Yee Mon, the Union Minister for Defense, told a news agency, “The military council is considering the election as its way out. Therefore, whether or not this election is held, there is no way our revolution will slow down a bit.”

The terrorist military council announced it will hold an election in August 2023.

Currently, only 17 percent of the country is under the stable control of the military council.

The Spring Revolution Concert and Fundraising Event to be held in the United States on October 15 will be attended virtually by Union Ministers such as U Yee Mon, Dr. Zaw Soe, and Dr. Sasa.

Regarding the event, Ko Zarni Win, a person in charge of the event, told radio NUG.

“The 2nd Spring Revolution fund-raising event organized by the DFW Myanmar Ethnic Community of Texas will be held at the Garland City Brownlee Auditorium on October 15th from 5 to 10 p.m. All the people of Myanmar are invited. Please be informed that the entrance ticket prices are $300, $100, $50, and $20, respectively. The programs will include local performances, including singing, dancing, and traditional folk verse performances, and the singers Linnith and Jenevy Sui will also be singing. Our No. 1 fundraiser, Ma Pencilo, will also come and sell auction items. It is also said that Akar Kyaw, a famous artist, will sell his revolutionary paintings as a revolutionary fund. Raffle tickets for Tesla will also be raffled off on that day. Tesla raffle tickets are now available for purchase for $100 each. Only 2,000 copies will be sold, and we are arranging to be able to hold a raffle on October 15th.”

As a special program for the Spring Revolution Concert and Fundraising Event, raffle tickets for a private car are also being sold.

On September 10, the Ministry of Labour of the National Unity Government released the announcement of backlisting and dismissing 70 more government officials who are working under the control of the military council.

The announcement states that the NUG has repeatedly invited the civil servants to not continue to serve under the terrorist military council, and to stand on the side of the people by participating in the Civil Disobedience Movement (CDM). The NUG has been making efforts to ensure the social welfare, safety, and pressure relief of civil servants who participated in the Civil Disobedience Movement (CDM) from various ministries.

The Ministry of Labour blacklisted and dismissed a further 70 staff who continue to serve the military council-controlled Myanmar Railway Enterprise, Ministry of Transports and Communications, on charges of harassing, intimidating, and dismissing CDM staff and demanding the repayment of COVID-19 assistance packages granted by the NLD government before the military coup, which do not have to be paid in accordance with the law.

Three batches of training have been conducted, and 120 volunteer teachers attended the first batch, 385 in the second batch, and 101 in the third batch, and are serving in the various villages in Htilin Township.

With the security assistance of various defense forces in Htilin Township, elementary, middle, and high schools are being conducted in more than 80 villages with over 7,000 students and over 1,300 teachers (including volunteers).

A public march will be held on September 17 and will march to the UN office.

“We are going to hold a Credential Campaign in New York on the 17th. The purpose of the event in New York is that Ambassador U Kyaw Moe Tun’s office is located in New York, and the United Nations headquarters is also located in New York, so there will be a large public march and demonstration that will be held in New York by Burmese people from all over the eastern part of the United States. In addition, not only in the USA but also in various countries around the world, Myanmar people will hold a large rally in support of U Kyaw Moe Tun on September 17th. That’s why we sit in various meetings, then we all get together, consult with representatives from different countries, and then we hold support demonstrations. When doing so, we set one campaign, one poster, and one global goal. One poster used all over the world is with the slogan “Myanmar for U Kyaw Moe Tun, U Kyaw Moe Tun for Myanmar”. We used only this slogan in the posters. Another thing is that our purpose in doing this is not only to organize a public rally, but also to make a statement about the Credential Campaign. This statement is also the same for the various countries. We all work together to send this statement to the governments, officials, and relevant leaders in the respective countries we are living in. When doing so, the main factors are the official recognition of NUG and the continuation of U Kyaw Moe Tun, who was officially appointed by NUG this year. Another point is that the international community rejects the military terrorist regime, which has seized power illegally, for its illegal actions, unlawful killings, torture, and village burnings, and then they all support us in eradicating the military dictatorship. We have sent it to the leaders of various countries in the world, as well as to the UN Secretary General and to the President, who will be the 77th. Moreover, when the 77th General Assembly is held on September 13, the President will form a credential committee with 9 countries regarding the Myanmar issue, and we will personally send the statement to the organizations of those 9 countries. Led by representatives in each country, we have agencies, global networks, such as the Global Myanmar Spring Revolution (GMSR), we all send statements together in unison. Similarly, we went to the Statement Department in the United States, sent statements, and then had meetings.”

He also mentioned the things that will be done regarding the eradication of the military dictatorship.

“Now the estimate is that thousands of forces from all states will converge on us in New York. With the participation of these forces and organizations of all ethnic groups and relevant organizations from all states, we will organize not only this campaign but campaigns for the MOGE sanctions, arms embargo sanctions, economic sanctions, technical sanctions, etc., will be carried out step by step. When doing this, the NUG at the top of our army is also supporting our actions, and the NUCC team has formed a Task Force regarding the Credential Campaign. This team also helps our work in various countries be synchronous.”

Public campaigns for the continued appointment of U Kyaw Moe Tun as Myanmar’s ambassador to the United Nations are also being held in countries such as Japan, the United States, and Korea.

On the morning of September 11, people in Khin-U Township peacefully marched and protested for the recognition of the National Unity Government (NUG) and the continuation of U Kyaw Moe Tun as Permanent Representative of Myanmar to the United Nations.

The protesters also shouted rallying cries, such as “NUG Government, Our Government!”, “Our Ambassador U Kyaw Moe Tun”, “5/ are brave, who is determined to eradicate the dictatorship system”, and “Kinn-U people, who have a winning attitude and who will make history.”

The march was attended by local people.

On September 10, the Click2donate initiative released a report of support.

It states, “This time, we were able to send a total of 241,875,000 kyats (over 240 million kyats) to 33 revolutionary forces. We received the proceeds from July on August 21 and we have been distributing them from August 21 until now. The proceeds of August will be received on the 21st of this month.”

Because the proceeds from clicking are an effective source of support for revolutionary forces, the Click2donate initiative encourages hundreds of thousands of people to spend 10 to 15 minutes clicking the links provided in the Telegram channel.