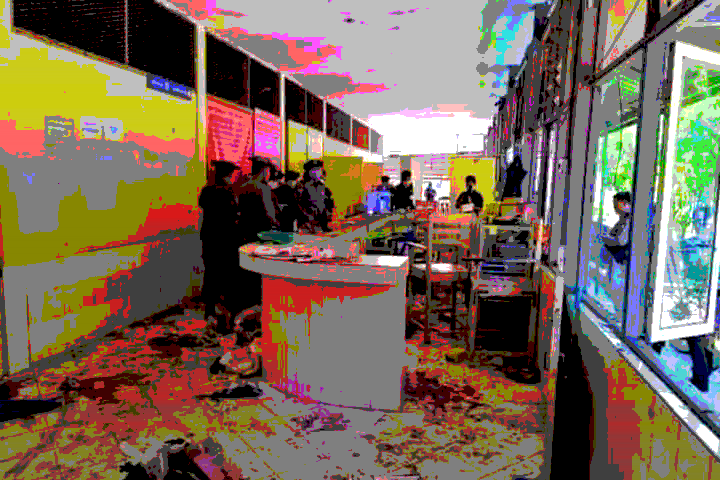 The impact of the bomb explosion at Insein Prison

Today, on October 19th, at 9:00 a.m., two bombs exploded inside and outside the counter of Insein Prison, where the registration and delivery of items are accepted. There were deaths, not only prison staff, but 8 people who came to see their prisoned family members lost their lives, and 18 were injured. Within seconds after the bomb blast, there were shootings from the bunker in front of the prison, and some reports said that some people were injured as a result of the shooting. Some news reports said that there were deaths due to the shooting, but there was no concrete information on how many people were killed by the shooting till that night.

Among the dead were mothers and family members of arrested people charged with Section 505-A. Some of the news reports said that a 9-year-old child was also involved. Daw Kyi Kyi Myint, mother of Ko Linn Htet Naing @ Ko James from the Student Union, and mother of Ko Hein who was arrested by being hit by a car during a protest on Pann Pin Gyi Street, Kyi Myin Taing Township in recent months, also lost their lives in bomb explosion.

It was past 9:00 a.m. when the bomb exploded while lawyers were crowded at the entrance to enter the special court that hears political cases in the prison. The second bomb exploded soon after. The first explosion was more intense and most of the deaths and injuries were said to be due to the first explosion.

In general, bomb blasts usually take place in military council administrative offices, outposts of soldiers and police, electrical offices, and some schools, and sometimes there are bombs planted near the security guard in front of the prison. This is the first time that an explosion has occurred in a mostly civilian area that is not a place of armed security forces. It might be said that it was targeted at the prison staff or prison officers, such as the warden. But because of the fact that they didn’t consider the possibility of harming innocent civilians if they detonated at the place where parcels were delivered to those political prisoners who were imprisoned due to participating in the anti-dictatorship movement, there were intense and fierce objections and condemnations that whoever did this action is unacceptable immediately emerged. Activists against the military dictatorship at home and across the border condemned it and the General Strike Committee issued a statement demanding that the organization responsible for the blast be held accountable.

Some have accused this a dirty act by military intelligence, and there are some who believe no urban guerrilla armed force would do such an act.

Without taking this situation into account, innocent people, in other words, making a target where the family members of their comrades are likely to be harmed, has come to be criticized as a filthy act politically and targeting an easy one.

Regarding this, differences of opinion have arisen among anti-military forces, and there were different views regarding the urban guerrilla attacks. There were those who thought military targets should be distinguished and understood, and those who defended with the view that there might be causalities while attacking the military council’s mechanism whenever possible. Another point is that various criticisms and debates have arisen, such as the fact that this act was done by the military council and pretended as if it was an act by the opposition side.

Many activists said that such targeting was unacceptable because it harms civilians. In addition, they viewed that it should not be done more as the family members of fellow political prisoners in prisons were affected.

Some people think that this is just a plan to divide the civilians and the armed forces by the military council, and that no anti-military council guerrilla force would target such a crowded area like Insein Prison.

However, on that afternoon, a group called the Special Task Force Agency of Burma released a video clip of the blast taken from the front of the prison with a cell phone. It was written that the prison warden was targeted and he was injured and killed, but there are no reports of the warden being injured in other news reports.

In Rakhine State, there were resignations of hundreds of ward/village administrators in 2018 and 2019, but we have not yet seen like that in the mainland. There were non-payment campaigns for electricity bills and taxes, bombing electricity offices, shooting at some electricity bill collectors, but as time went by, families who did not pay electricity bills had to pay the bills as they were facing water and electricity cuts by the authority.

The main revolutionary military aim for the collapse of the military council is not yet at the stage of territory dominating but still at the stage of guerrilla attacking, and ambushing a their own way collectively. Now it is necessary to train local defense forces to become armed forces that are capable of capturing and governing villages and towns; to build an army that can operate under one single command; and to appoint experienced armed forces leaders who understand military strategy and tactics.

I think this incident indicates that it is the time to review the bombings and killings in the city and the time for leadership organizations politically and militarily to re-organize all the revolutionary forces and missions.

← Current situations and prospects for the next year
Daily Local News In Brief – October 27, 2022 (Evening) →