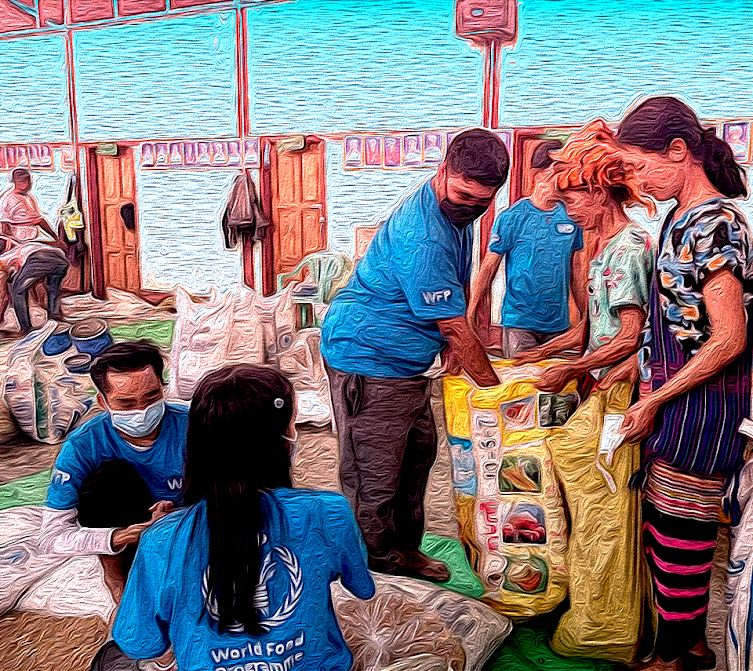 The military council has issued an order the United Nations and other international aid organizations r to stop sending aid to 6 townships of Rakhine State, which have been providing aid to those who have left their homes due to the battles since 2017 and have been sheltering in a village or a region where they have escaped the battles, and to those who have been living in the temporary refugee camps of the monastery for years because their villages were burnt down.

Banning international humanitarian aid organizations such as the United Nations and the ICRC is intended to prevent food and medicine from reaching the armed forces of the other side, and in practice, all the refugees fleeing the war living in those areas will have to face a more difficult situation.

During the history of the Myanmar civil war, although the strategy of the so-called “4-Cuts”, which are Cutting of food, contact, money and recruiting manpower, was used, the ethnic armed groups still could not be eradicated, and there were stories of people living in these areas who had to live in refugee camps in the border areas for decades, people losing their lives because they had to buy and eat food and medicine at a high price, and they could not get medical treatment because there was not enough food.

Now that the AA group has become powerful in Rakhine state, not only military force, but also parallel administration and judicial tax collection, the military council is preparing to attack the AA even though many war fronts have been opened in the mainland and some other regions.

For this reason, international organizations that provide humanitarian assistance to refugees living in refugee camps in Rakhine State have been banned and it can be concluded that the military council is making the situation difficult for AA to get food and medicine by doing so.

For the people of Myanmar, they have to live in the midst of armed conflicts, like those who were sanctioned during the civil war that has been going on for decades. If you look at Paletwa Town and the lives of its residents, you can see the worst-case scenarios.

In addition to not being a good economic region, people have to transport fuel through Sittwe in Rakhine State in order to travel to buy medicine and rice and to use for agricultural activities by relying on land and water routes. Even before this inflation and before the price of rice was high, people had to buy a bag of rice from 68,000 to 100,000 and pay 3 times the price of fuel than that of the mainland. The military dictators have sanctioned residents while trying to win the armed conflicts. People in the underdeveloped areas are also suffering from high food and drug prices.

After the conflicts based on ethnicity and religion in Rakhine since 2012, many temporary camps like refugee camps have emerged due to the arson attacks on houses in many cities and regions, including Sittwe, the capital of Rakhine State, and the order to live in segregation on the basis of different religions and ethnicities. Again, after 2017, as a result of the conflict between the AA and the army, many refugee camps were established, and there are a large number of people depending on the assistance from international organizations and the Ministry of Social Welfare Relief and Resettlement.

It is in a situation where no one can predict how many more homes, villages, and human lives will be lost due to the current armed conflict.

Similar to Rakhine, there are also many regions at home where many refugees and humanitarian aid can’t be received after the military coup and the areas that suffer the worst are Kayah State, Sagaing Division and the upper part of Magway Division.

As for military dictators, they never take into account the possibility of civilian casualties in order to win the armed struggle. They blocked the transport of food, medicine and financial support for the entire region so as to weaken the opposition armed organizations and earn their win. They never consider the public’s hatred toward the military dictator and the public’s opposition that will build up more to send them to their downfall.

← Norms of human life, dignity and human rights
Leadership and policies are important in a revolution to change the system  →