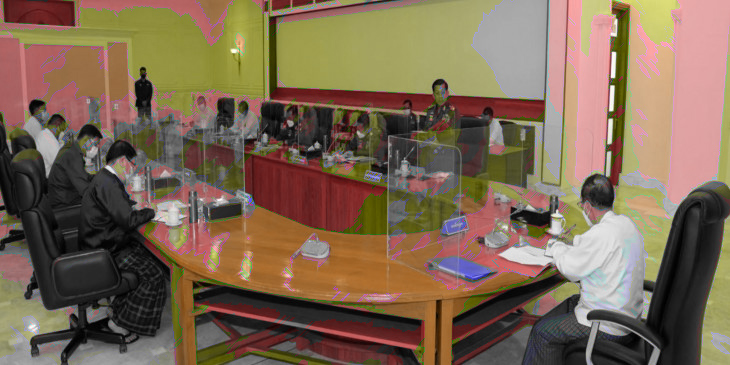 It has been exactly one and a half years since the military coup. The military council stated that the 2008 constitution has not been abolished yet, referring to the information in the constitution, and extended the 6-month term of state of emergency administration for the second time. When the government was formed after the 2015 election, it was proposed by the military and approved by U Myint Swe, who was the vice president, and extended at the “Karlon” meeting (special meeting of the National Defense and Security).

During the past one and a half years, armed conflicts in the country have expanded unlike any other time of Myanmar history. Rather than fights with ethnic armed groups, armed conflicts have occurred in areas without a history of previous armed conflicts. In upper Myanmar flat farm land, small armed groups emerged and started resisting and fighting with hand-made guns, handmade bombs and reused artillery shells. The armed groups have issued warning not to travel on the local roads connecting one region to another, and the junta troops who went in and sometimes civilian cars were blown up by hand-made mines. There were civilians killing each other, assuming an informant or a pillar of the military council administration. In big cities, there are explosions or shoot & run attacks in one place or another almost every day. The above are what happened in the last 1 and a half years ago.

While fighting and protests spreading across the country, a representative committee with elected parliament members called CRPH was formed. Then opposition political leaders resisting Myanmar military then formed a National Unity Government in coalition not only with NLD party and representatives of some ethnic groups, but also with some of the people who founded and worked in civil society organizations called CSO. The diverse groups of interests who are generally against dictatorship joined the National Unity Government called NUG. Although it is not clear that how the PDF groups established by NUG are on the ground and how much forces there is, Myanmar people and supporters of Spring Revolution are collectively following local PDF groups and some Ethnic Revolutionary Organizations with their own personal or like-minded preferences.

The military council said that they will hold elections in August next year with the time table they have prepared. There are many doubts about the possibility of holding an election in this semi-civil war situation. On the other hand, one of the worst-case scenarios is that the military council’s next election could be compared to the 1950 election. It is said that the 1950 election held during the civil war of 18 months and only 18 % of the eligible voters voted. However, it was concluded that the election was legally valid and binding. At that time, elections were held while many areas were under the control of various armed resistance groups such as Bakapa (Burma Communist Party), Red Flag Communist Party, KNDO, People’s Comrade and some other ethnic armed groups.

The current period has many different back stage situation, not like the situation in 1950. But, whatever it takes, there was an expectation that the general election were able to be held within a period of one and half a year. Even though only 18% of eligible voters voted, the fact was that the election was held and legally upheld and accepted by the regime and the people of that time. It might be comparable to the current situation’s tendency.

Political analysts and critics often use the word that the election is a political exit, and the military council may consider the election as an exit to an international diplomatic crisis and relief of pressure from the domestic opposition.

For NUG and forces who had made a decision for armed revolution, they may not see the election as an exit and may determine to make the military council unable to escape from this election exit.

For that, the military strategy, political strategy, planning of arms, ammunition and organizational structural controls were needed or reconsidered for military and political leadership in opposition side and they need to step up their preparation.