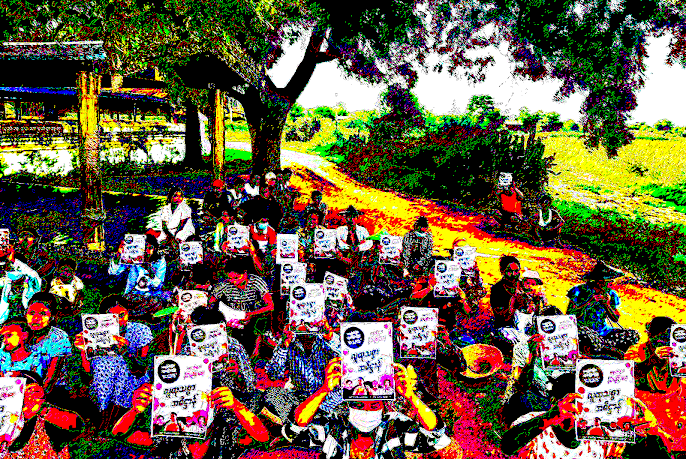 If you read the daily news, you will find news of houses being set on fire in villages in Sagaing Division, killings members of PDF or people as suspects by soldiers of the military council, killings people as suspects of junta informants or Pyuu Saw Htee by the hands of PDF’s, road-side-bombs attacks on the local roads connecting towns and villages. There were daily reports on casualties due to hand-made-bombs explosions, casualties due to bomb attacks at the police stations in cities, outposts at crossroads. There were news of  arresting some civilians in cities and towns and charged by the military council and deaths of some due to torture while in interrogation. Under this political situation, the rule of law is deteriorating significantly, so robberies, snatch theft and killings at crime sence are happening in the countryside as well as in big cities.

On the other hand, there is also news about rises in commodity prices, edible oil, rice, pharmaceuticals and significant decrease in the value of Myanmar kyats and the unprecedented rise of gold prices.

These are the news of local events, and in the news of Myanmar from abroad, the NUG government requests international military intervention and assistance and asks for help with arms.

As for those on the ground, there are more painful and more worsening situations than what appeared in the news.  And at the same time, in reality at some area, people were still going about and taking care of daily business like nothing happens around them. The people in war torn area were  travelling around in fear. The scorched-earth arson attacks by the junta that are happening in the villages. The killing of each others just by suspension of being informant or supporter of the other side without any proper proof took place far more than the news reported. The difficulty of getting medical treatment and hard to get proper medication were far worse in remote villages than in the cities due to travel restrictions by the Regime limiting  people moving from one place to another.

Under rains or shine, the weather is affecting the well-being of internally displaced people in upper Myanmar who are living in hand made tents and poorly made shelters while their homes and foods were destroyed by wars. They are facing  much worse situation daily than what could be written in the news and expressed with visuals and sounds.

In big cities, despite bombings, assassinations, arrests and torture occur from time to time, there are thousands or hundreds of thousands of people living, and they go about thinking that not everyone will have to face the same situation as in the villages. For unfortunte people who were used to make a living in the countryside, who were used to grow and store foods for a whole year, now facing total dire situation where they were fleeing for their lives and safety abandoning their peaceful lives. But in cities, though there are risks of being robbed and being killed for looting, city-dwellers still go out with the thought that this kind of fate will not happen to them.

Rises in commodity prices and jump in inflation cause manual laborers, daily-wage workers and low earning employees forced themselves to go to work daily or go to find work to survive. Higher commodity prices based on political instability cause further decrease in living standards. For ordinary people, they have to spend 70% or more of their income for daily living and eating, not easy to get enough necessary medical treatment, education and shelter.

While ordinary people are facing such various hardships and crisis, there were some people who consider this chaotic era as an economic opportunity and they were taking advantage of other’s miseries, raising prices, pushing into black markets trading. In Yangon, there are also people who are still affluents and still enjoying  shopping  for famous brands of clothes, accessories and jewelry.

In an era of crisis, instability and without peace, the inequality between the rich and the poor becomes widened. Under such circumstances, it is important for people to help and support each other and not to use the crisis as an opportunity for each individual. The political leaders, groups  that lead the people have the responsibility to do find resolve.