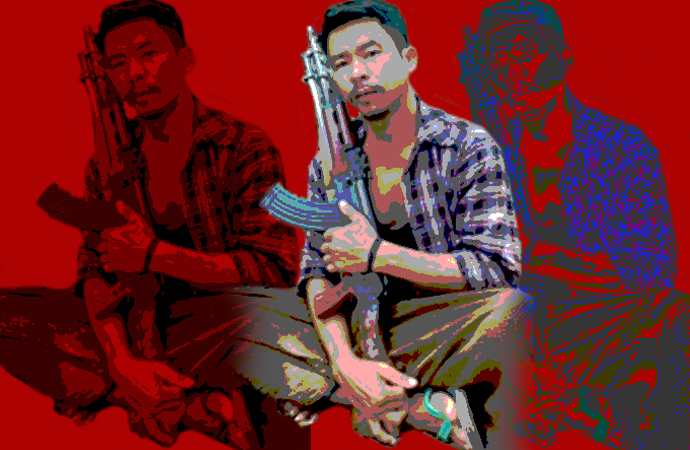 When I listen to the interview, I can see some situations in the Pale and Yinmarbin regions of Sagaing Division, the difficulties of the armed revolution and how would they like to see the NUG, the organization that is leading this revolution, to be more involved. What do they expect next. What don’t they get. Some of the other analysis on the current situation by other armed resistance group were mostly not reflecting the real situation on the ground but only to motivate the audience.

The leader and founder of the armed group known as the Myanmar Royal Dragon Army, who has taken a name himself, Bo Nagar (Captain Dragon), is the person who led the attacks on the military council’s troops and now becoming more like a political leader than just resistance fighter. There are also some leaders like him in other townships who emerged from a township not far from Monywa in Sagaing Division. There are well-known leaders such as Bo Thanmani from Thapyayaye village on the Yinmarbin side, who are still being under trial by the war-crime-tribunal formed by NUG for arresting and killing PDF members from other groups. However, unlike other armed resistance groups, Bo Nagar has a good reputation so far.

If the Myanmar Spring Revolution would bring about many positive changes due to him alone and the discipline of the army he leads, which earns people’s trust, then this kind of conclusion might  not be that simple. Although he is able to carry out such successful armed attacks in some areas of Sagaing Division, it must take into account the present standing of ethnic armed groups in other areas or other regions and states, their purpose and interests and the relationship between the armed groups on either cooperation or conflicts. And it is also have to think of their pasts and history of war events in Myanmar.

It could be concluded that Bo Nagar emerged as a well-known resistance  leader because he is a person came from grass-root movements,  who emphasized honesty in people-politics and who follows rules set by the organization he is active in.

In order to be honest in politics, I think it is necessary to clarify about political trickery and honesty about whom to be tricked and whom to be honest. It is necessary to be honest with the majority of people they are working with and the purpose that we have announced that we are working on. And if the other side is the enemy, we need to do trickery on the opposing force that is working to destroy our purpose. It is true that practicing the trickery tactic among the alliances rather than the enemy, will create suspicion, mistrust and destroy alliances and cooperative movements.

In the interviews of Bo Nagar, it includes his personal attitude of not being satisfied with the NUG, urging NUG to make a more positive change  and suggesting how could it be done. He laid out some of his idea on how to defeat the Military council by stepping up planned and coordinated attacks

He didn’t just talk with face-lifting words that fans would love such as;  “we are winning now”, “we are going to succeed tomorrow” and “we will win soon” and etc. etc. With his honesty, he explained the real situation on the ground.

He said with specific words that as for the armed groups, the steps of war operation were to be done in stages such that the state of dominance, the state of being in control and the final state of overtaking the area, are different.

He can be judged as a person who is not just a fighting military leader emerging from grass roots, but understands the political policy, the principle of organization, learns politics from real life, and understands the relationship between politics and the military.

In his interview, he also criticized the NUG’s weakness in communicating with armed groups in various areas, without saying any attacking word. It is understandable that he indirectly criticizes NUG’s poor connection and collaboration with the situation on ground with the words “are they looking with a divine eye?”, meaning NUG see everything without looking.

For  an armed group without political belief, understanding and end-game on sight, if it tries to operate more longer,  it is very likely that it will end up as a bandit group that relies on weapons and burdens the public by collecting taxes. It can be concluded that Bo Nagar is not that kind of armed group leader, but an armed leader who understands politics. He is a person who is one stays with the public, having an honest mind and attitude towards good politics. We must also understand and accept the situation of not being able to change Myanmar’s politics with only one region like Pale Township or Sagaing Division.

It is true that Myanmar’s broad and complex problems such as ethnic issues, the influence, aid and pressure of neighboring countries, etc, are important to some extent in Myanmar’s political and military changes.