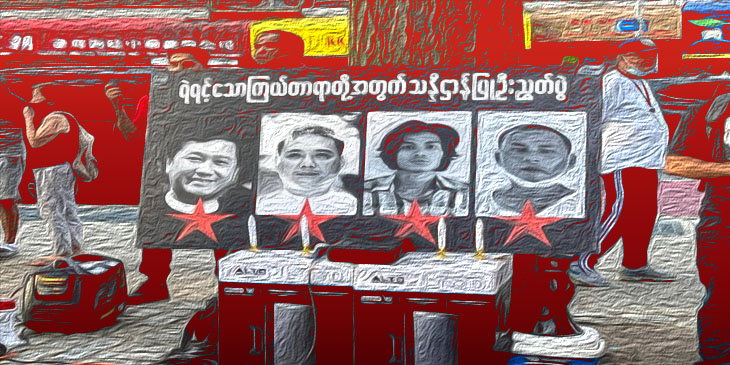 For the 4 people who were hanged in secret by Myanmar military on the previous 23rd and 24th, some local political parties, some ethnic armed organizations, expatriates, political organizations, international governments and human rights organizations raised their voices of objection and condemnation. Even the regional international organization, ASEAN, has expressed its objection to the death penalty. As some Western European countries have abolished the death penalty, they condemned the Myanmar Military Council’s execution with serious words. Why they oppose the death penalty is that the execution of 4 people who were sentenced to death by the court under the anti-terrorism act and murder act would be not the last but  it might be opening the door of possibility that many people who have been sentenced to death by Regime will continue to be executed.

Among 2 of the 4 people sentenced to death, one was elected as a member of Parliament from 2012 to 2020 before the military took power and worked closely with the leader of the government, Daw Aung San Suu Kyi, and the other one was a student leader of the 88 generation. Because of these facts and also they, opposition political activists, were accused of directing urban guerrilla groups, the swift death sentence was imposed by the military court. It can be concluded that this act has caused serious implications as it was aimed at subduing the urban guerrilla movement.

On the other hand, approximately a dozen of unarmed civilians are losing their lives every day, not including the number of armed-people killed in  battles or conflicts among the armed forces. At least over 3000 civilians are assumed to have died due to conflicts that occurred after Myanmar’s military coup due to violations of human and children’s rights, abuse and killings by armed groups. It is a figure that estimates the number of deaths  from both side with different political views. It could be concluded that an average of five unarmed people died every day by means of killing with weapons, torture and killing under the name of interrogation.

Although civilian losses, not the losses of armed people, cannot be reduced to zero, every organizations involved in conflicts has a responsibility to work to reduce civilian losses as much as possible. There’s a need of organization that could prevent unlawful killings with forceful enforcemnt  or strict regulations. A system to identify and record the crimes committed by armed groups should be allowed to do their business. While working to identify and record such unlawful killing and abuses, it is necessary to have them protected by law from both side of conflicts. It is important that witnesses and sources of information are not at risk to further jeopardy. It is true that there is a need to mobilize diplomatic pressure and urge international human rights organizations and governments to make it happens.

But it is necessary not to give unrealistic and false hope that such monitoring, record collecting organizations could prevent what is happening inside Myanmar. It is important to deeply understand that the resolution of domestic problems depends only on the strength and the right leadership of local forces. Therefore, the incident of the four people who had been executed to death is a wake-up call to urgently find a way to prevent the daily loss of life of all innocent civilians. It is an event that hi-light the need for the right leadership and public awareness, not just flying out statements and announcements.