“They are preparing for security at tomorrow’s Union Day ceremony. They fear that bombs might be planted there. I think nobody would be interested in the event”, said a passenger sitting next to me. Meanwhile, a blue police double-cab passed ours and we saw two police holding their guns and sitting in the back seats of van.

That travelling companion gave a smile to those police on the car while he kept talking to me that “The people don’t hate them [soldiers and the police] but they hate the system. The junta treats its own people as enemy. We realize that the security forces are, to some extent, needed for safeguarding us.” Then, he added that he wants to know the police men’s response.

Before tomorrow’s ceremony, the government positioned soldiers and the police to secure the whole surrounding area of people’s square planned site for the event.

The Union Day of the Union of Burma is deeply concerned with every ethnic nationalities which we generally called Kachin, Kayah, Karen, Chin, Mon, Myanmar and Shan. It, however, is greatly regretful for all nationalities of Burma that their own country has the longest civil war in the world. 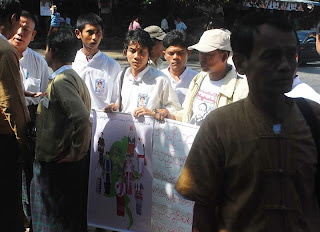 It was seen that the banner reading “the 64th anniversary of Union Day of National League for Democracy” had been hung in front of NLD’s headquarter. On the other side of the road, hanging a bag over his shoulder, a plain-clothed man from SB (Bureau of Special Investigation), with a good camera, was taking photos of those came to the headquarter one after another.

Except for him, other SB staffers stood their motorcycles nearby and were leisurely sitting in the tea shop. Also, some people were already gathering about in groups outside the office. At the moment, a group of youths wearing Karen costumes were coming out from the head office. Their appearances look free and lively. There were also some people who might not be members of NLD including a group of youths among the onlookers.

At that time, in Myanmar longyis and white short sleeved shirts and with popular haircuts called “Imo”, several young men wearing brooches with a portrait of Daw Suu as ear studs and two spike bracelets in their hands just arrived there. The view of different types of youths attending the ceremony brought Union Day more alive.

In his speech, U Tin Oo, the Vice-chairman of NLD, said that national unity and union spirit have been achieved by the visionary efforts of Burma independence father Bogyoke Aung San and the great leaders of ethnic nationalities.

In today’s event, U Tin Oo delivered a speech about the essence of Union spirit. After U Tin Oo and Daw Aung San Suu Kyi had made their speeches on Union Day, a representative of ethnic groups talked about union spirit.

It is seen that dozens of journalists and reporters from new agencies at home and abroad attended and covered the ceremony.

Here I drew a distinction between the event where number of reporters to attend was restricted by the junta and the NLD’s ceremony, in which place the correspondents were able to gather news freely. At that instant it crossed my mind that freedom of media can be changed according to the circumstances.

Union Day in the Calendar and in Real Life

Besides the activities presented above, eleven political parties which ran in the junta’s election joined together and hosted the Union Day’s celebration.

Although different occasions of Union Day were celebrated in various places, only the ethnic nationalities will be able to understand which one would really reflect the meaningfulness of Union Day.

It is also learnt that there were armed conflicts between government border guards and KNU’s troops, during these days near KotKayeit town in Karen state, and a bomb exploded at Myawaddy friendly bridge, as well. Therefore, it becomes a matter to ask the present military government why ethnic nationalities had to flee from their home by fear of armed fights while the Union Day’s ceremonies were being held in big cities like Yangon.

Moreover, women from Chin and Karen States have been still oppressed and exploited as weapons by the military. Children in their school age are reported to be forced to join the military service. According to these situations, I think that it is still a long journey for all nationals of Burma to enjoy the fruitfulness of Union.

A youth who came to NLD’s headquarter expressed his view: Union Day would be meaningless for us if the junta does not stop buying weapons, if  women are being oppressed and if children are being seen in the battlefields.