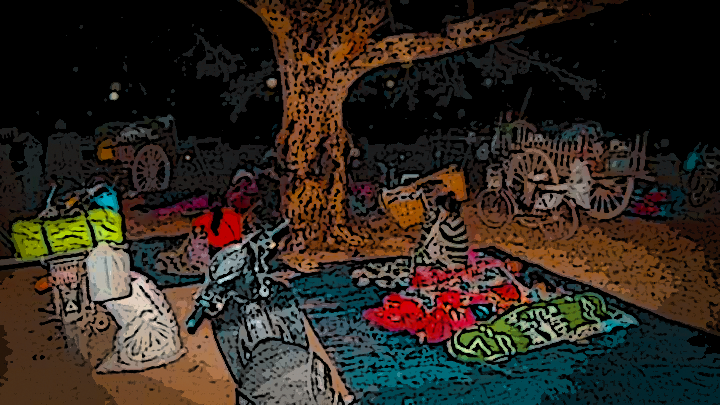 On social media, the behavior of the majority of local residents and their participation in events are being written about through various opinions, approaches and evaluations. On the side of the military group, they want to spread propaganda that the situation in Myanmar is peaceful, and that people from various cities visit pagodas, parks, and recreation areas on religious days and holidays, and are no longer interested in political activities. When villages in many regions of Myanmar are being destroyed by fire and people are fleeing from their homes to fields, forests, and mountains with only a single piece of clothing, people in the city are having fun going to places like pagoda beaches, and there are those who blame it.

In fact, it’s not like the people in the city don’t know anything about the rural people. It is true that there are many people from rural areas who have fled to their relatives and family connections in Yangon.

However, there are many people who are busy working to earn a living, and there are also many people who go to crowded pagoda places to temporarily relieve their stress and fatigue. This is the life of ordinary people. Those who are considered to be middle class and have quite enough money can also be seen eating and drinking in restaurants, beer bars, and nightclubs in the evening and at night.

There are barbed wire fences around the administration office and security guards to slow down the traffic. Near those places are KTVs and beer shops which are crowded at night and this is a sight of Yangon.

The people who believe that the Spring Revolution will be decided today or tomorrow are gradually decreasing, and they are beginning to understand that the battle will be a long-term fight. Because of these thoughts, it will probably be the sense that they become involved in daily life and entertainment issues.

However, on the other hand, it will be seen that there are very few people who set up plans and work to build the future of their individual lives. People all over the country have witnessed the deaths of tens of thousands of people due to unlawful killings for arrest, protest, opposing the military council in front of their eyes, and the COVID-19 disaster in one month.

There were many young people who threw away their future aspirations and went into the jungle to fight armed. Among these young people, some of them were arrested and killed or died in armed conflict. Not only because of politics, but also due to the lack of rule of law, crimes are happening every day, and incidents such as being killed to get things are happening in our community almost every day.

Those who are going to live happily in the present because setting goals and having hopes for the future becomes unrealistic, and those who feel depressed, don’t want to do anything anymore, give up, and ignore everything, are seen a lot in our environment.

The morning news is frequently filled with reports of deaths. In the midst of this situation, there are also people who end their lives because the military council labels them as trespassers, demolishes their houses, and forces them to leave.