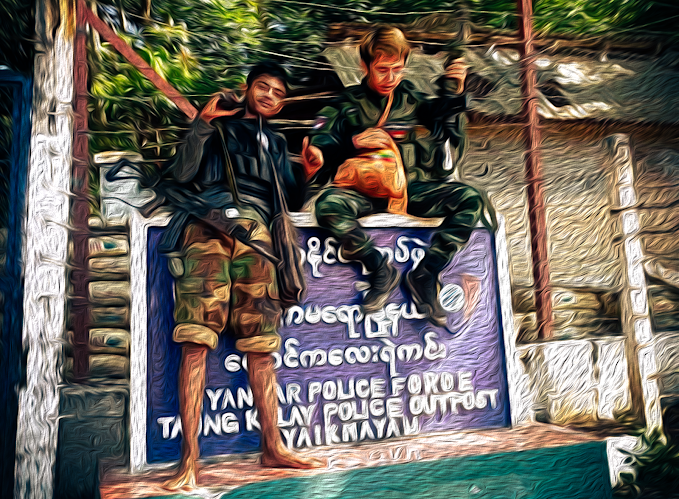 Myanmar: One of the two countries in the world still using landmines; Attack on the Taung Kalay Police Outpost

According to a recent report issued by the International Landmine & Cluster Munition Monitor (The Monitor), there are currently 2 countries in the world that are using landmines during the war. Among those two countries, one is Myanmar and the other is Russia. Although wars are happening in many places here and there around the world, there are only 2 countries that are using landmines. It also means that even countries like Syria and Afghanistan, which have been at war for decades, no longer use landmines. In a country like Afghanistan, which has been the battlefield of wars and foreign invasions, it is read in the news that they have used a large number of car bombs, explosive hand-made mines, and that tens of thousands of people have died. And currently, Myanmar is one of the two countries in the world that are using landmines.

The Myanmar conflict cannot use modern weapons such as highly destructive missiles and ground-launched artillery, but instead relies on widely dispersed small arms, launchers, and landmines. In other words, it is like a dirty war where landmines are used in large numbers, causing people to lose their limbs and lives.

During Myanmar’s armed conflicts, both the government military and ethnic armed resistance organizations have been using landmines for decades, and there are tens of thousands of people who have lost their limbs in the country. This situation did not diminish, and after the military coup, landmines became a major weapon of war when the armed resistance and the attacks were increasing.

Another piece of news for today is that the KNU attacked the police outpost of Taung Kalay Village near Chaung Hnit Khwa Village in Kyaikmaraw Township, which is bordering the KNU-controlled area, early this morning and captured the station.

While capturing the police outpost in Kyaikmaraw Township, which is a part of the 6th KNU Brigade, the news reported that police and soldiers of the military council were killed, and weapons and ammunition were seized. It is also said that there were air strikes and attacks by the military council. Battles like the Taung Kalay police outpost case are happening every day here and there in different parts of Myanmar. But, in the current situation, these battles are not yet in a position to determine victory or defeat.

It cannot be said with certainty whether or not 2023 will be the year of deciding victory or defeat.

Although the Acting President of NUG said that the answer will be decided in 2023, it is currently in a position that is difficult to say whether or not it will be the year that will be decided by military means.