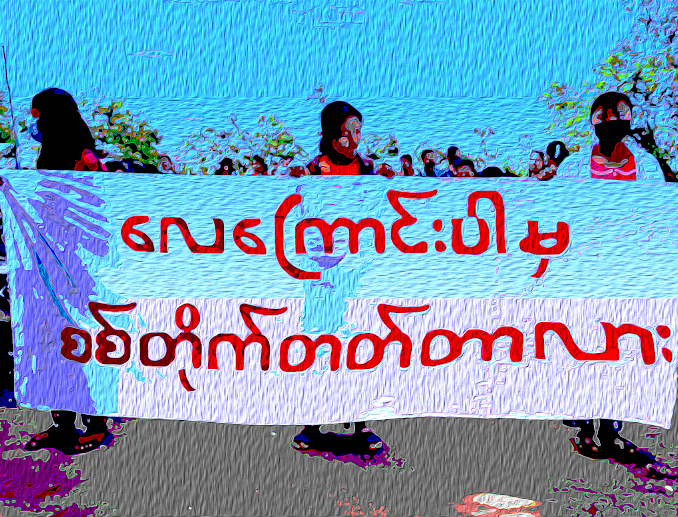 Armed conflicts are taking place all over Myanmar in the southern, northern, western and central regions. Among the daily news, the battle news from Sagaing Division, Karen State, Kayah State, Rakhine State, Upper Magway Division and Chin State are on the daily news pages. In the battle news, death, injury, burning of houses, looting and destruction of property are the daily news items, and it is becoming not-so-news incidents for the readers. It may not appear strange, but for those who have lived through it, it is an experience and trauma that they will remember for the rest of their lives, as well as a loss that cannot be replaced. It is likely that famine and disease will follow.

In today’s news, there is news that a village in Khin-U Township in Sagaing Division was burned for the third time, and reports that military council troops had entered and set fire to Thabeiktaung Village in Buthidaung Township, Rakhine State, and that the villagers were being arrested and interrogated. There was also battle news in Moebye Region, Kayah State. Not a day goes by without news of the military council marching and burning villages, airstrikes and villagers dying in Tabayin, Ye-U, Khin-U, Taze, Pale, Yinmabin and Wetlet Townships, in Sagaing Division. It is seen that the PDF groups operating in these areas have not yet reached a situation where they can protect the villages. The question of how to prevent villages from being burned down and civilians from being killed is becoming a major one.

To reduce the danger of war, the regionally organized armed forces of that region should find a way to use military force to protect the village population, or else they should establish a specific armed base area and operate without basing in the villages. In carrying out the armed struggle based on the villages and because the public supports or accepts the basement, it can also be concluded that the military council is using a strategy to separate the armed forces from the village population by arbitrarily punishing them.

The military council predicted that one day, when the village population have shortages of food and is unable to engage in agriculture as their livelihood, they will no longer be able to help the armed forces that are attacking them, and will give up armed resistance.

In suppressing armed resistance attacks, oppressive dictatorial governments often hold the public hostage and crush them to prevent them from participating in armed resistance. It can be concluded that Myanmar’s military dictator is also using such tactics. As ethnic armed groups, based on their decades of armed resistance and fighting experience, they have been carrying out battles for decades with bases on the borders of neighboring countries away from their villages after calculating the consequences that will affect the local communities of their ethnic groups if an armed conflict occurs.

After the 2021 military coup, not only the ethnic groups, but also the areas where the majority of Burmans live, such as Magway and Sagaing, armed forces emerged and attacked the military forces.

Attacks have not yet been seen to move in sync with each other, and there is a majority of defenses, interceptions and ambushes in each of the regions. It is also seen that armed attacks between regions or groups are still unable to be carried out as joint activities. The fact that arms and food supplies cannot be supported by a central organization may be one of the reasons for not being able to command a unified movement. It may also be due to the political, military and strategies of ethnic armed groups that have already existed in the region.

I think it will be necessary to seriously consider the ongoing armed resistance attacks and how to reduce the damage to the public after reviewing and evaluating them strategically.