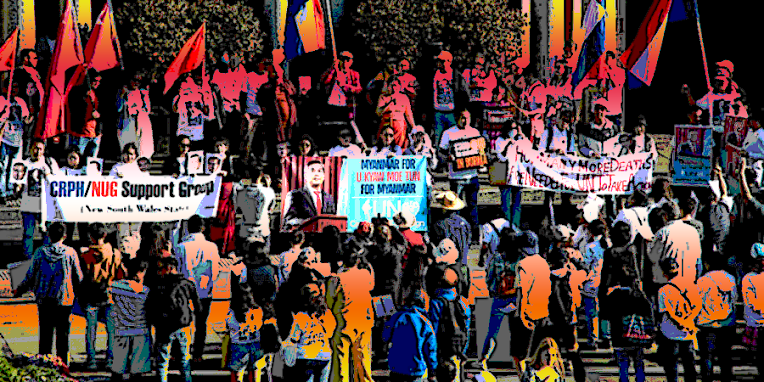 UN to  recognize Myanmar’s Permanent Representative at the United Nations does not have a direct impact on stopping the villages being burned on the ground and stopping the lives of civilians and children being lost, but it is diplomatically important. There are also those who see it as a ray of hope for the people at home.

A person who is in prison for a political crime reached out to his friends this morning and asked if there was any news regarding the United Nations representative’s case because he heard the matter would be decided today. Those outside are not so interested because they are not sure whether the continued suspension of the UN permanent representative or the full recognition of U Kyaw Moe Tun will bring about major changes or directly affect Myanmar’s affairs, but some of those in prison are interested in that matter.

What will happen if it is fully recognized at the United Nations? Can weapons be bought legally? Or there may be questions about whether the international community will be open to aid for the Spring Revolution. As a number one fact, the NUG government is not officially recognized as a government yet, but the continuation of Ambassador U Kyaw Moe Tun, who has supported the NUG and is no longer loyal to the junta, as a representative at the United Nations can be considered a position where the snake is not dead and the stick is not broken (meanings Junta and NUG still in the same den), so the NUG would want full recognition.

Another important point is that if there was a geographical area that the NUG could control. Until now, the controlled area has not been determined and the status of being unable to show the region where the NUG government is headquartered may be one of the reasons. Some ethnic armed organizations are in a situation where they can show control over the territory, but NUG does not have a similar situation yet.

Therefore, there are still some requirements for the United Nations to fully recognize the NUG and to completely remove the military council from recognizing it.

Putting diplomacy aside for a moment and talking about the actual situation on the ground, I think that after the NUG has fully chosen the armed path, it will be necessary to prioritize the unity and the formation of the PDF forces under a unified command. Only then will we be able to fight strategic battles rather than just defending and fighting in each of the various regions. In order for this to happen, I think 3 main things will be needed, which are money, arms and territory. I think it will be necessary to have the kind of leadership that can manage and command the leadership situation to meet those needs and to have practical discussions and talks with the ethnic armed organizations that already exist, both politically and militarily. If these things can be fulfilled, things like the recognition of the United Nations are no longer in question and can be decided. It is possible that the international community still has doubts about the existence of an armed revolution in unity and under unanimous order.

Even before this news, there was news of journalists who had been sentenced at Hpa-an Prison being transferred to Kyaikemaraw Prison.

In the era that will be recorded as one of the most politically charged periods in Myanmar’s political history, there has already been loss of lives due to poor health in prisons.

← Armed conflicts and sacrifice of local communities
Khin Myo Chit and her book, Gift of Laughter by Junior Win →