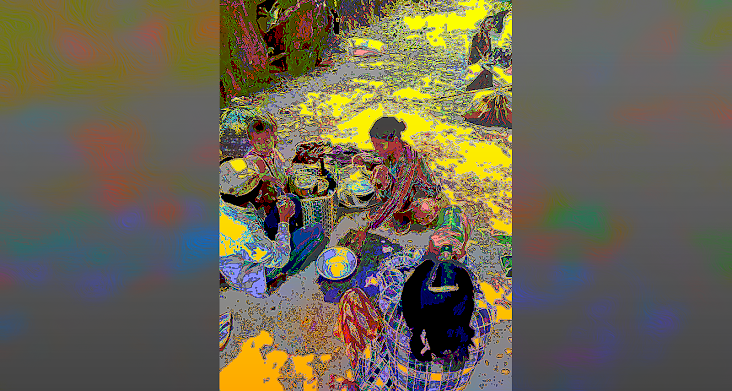 Among the 2 robbery incidents on the news today, one of them was an armed robbery at a large gold shop in Monywa city and looted several ticals of gold, and another one was that a store in Insein Township, Yangon, was robbed all money at cashier with a knife.

Like these news, the news that we often read and hear is the news of bank robberies, gold shop robberies and the news of people entering homes, taking things and killing people. Similar incidents happening in other areas  were not reported in the news media but still happening in large scale. Last week, there was an incident where a house selling gold was robbed in Pyinmana, but it was not in the news. Also in Pyinmana, last week, a local fried snack vendor selling “Lewe Fried Mont Lone Gyi” was stabbed to death with a knife and the proceeds from the sale of the snack were taken. These events were known only among the locals and were not reported in the news media.

Before those incidents, there was also an incident in Myitkyina where the grandfather of a poor family was killed by a thief for witnessing him breaking into the house to take things. In cities, places where large sums of money can be looted, such as jewelry shops, are becoming targets, and robberies with a gun or knife often occur. And in North Dagon Township, a suburb of Yangon, gold chain snatchings and robberies are daily occurrences.

The fact that people are struggling economically is the reason for the robberies, but the truth is that there is no more rule of law and order, which is the main reason, and the struggling economy is the supporting data.

After the military coup, there were political attacks to destroy the administration of the cities and villages, and the main law enforcement organization, the police, is equally targeted, shot, bombed and killed along with the military by the urban guerrillas and PDFs in respective areas, as they were involved in suppressing political opposition to the military. As the law enforcement organization is no longer able to carry out its primary duties, the police are now acting only as it is the duty of the police to interrogate those arrested by the military and bring them to court.

Not only the police with brown uniform in police stations, but even the traffic police in white, are being treated as targets in the cities. In the past year, there have been killings of traffic police in cities such as Yangon, Sagaing and Mandalay.

Even in big cities like Yangon, there are traffic jams at traffic lights due to a power outage, but the traffic police hardly come to clear them. At some intersections where you normally have to cross for about 1 or 2 minutes, there are often incidents where you can’t move forward or backward, and get stuck for 10 to 20 minutes because when the traffic light went out, cars were rushing to cross.

The military council’s police cannot act quickly and efficiently in cases of bank robberies, murders, and killings by taking properties and conducting raids. The police, controlled by the military council, are helping to identify cases of explosions and shootings that have occurred in the city, and are assisting in investigating and arresting those involved.

In the same way, people do not report to the police station if occurrences of snatching, robbery and theft happen. It is because they did not have trust in the police and did not believe that the police would investigate and arrest the culprits for these cases. This lack of complaints and impunity is the main reason for the deterioration of the rule of law. Having more opportunities to escape from being punished motivates them to commit crimes.

The current situation is not comparable to the time when the Second World War spread to Myanmar, when the administration failed and thieves robbed and murdered those who had money with weapons, but it is believed to be heading towards a similar situation. There is a possibility that the rule of law will deteriorate even more in areas where the armed conflict is more intense than now.

The incidents, which made even the cities where there was no war, no longer safe, could further raise the assumption that people’s lives and homes have become unprotected due to the armed revolution.

It is a time when there is an urgent need to be able to start working on plans that help each other who are facing difficulties with food, and plans that protect the public’s safety around each other.