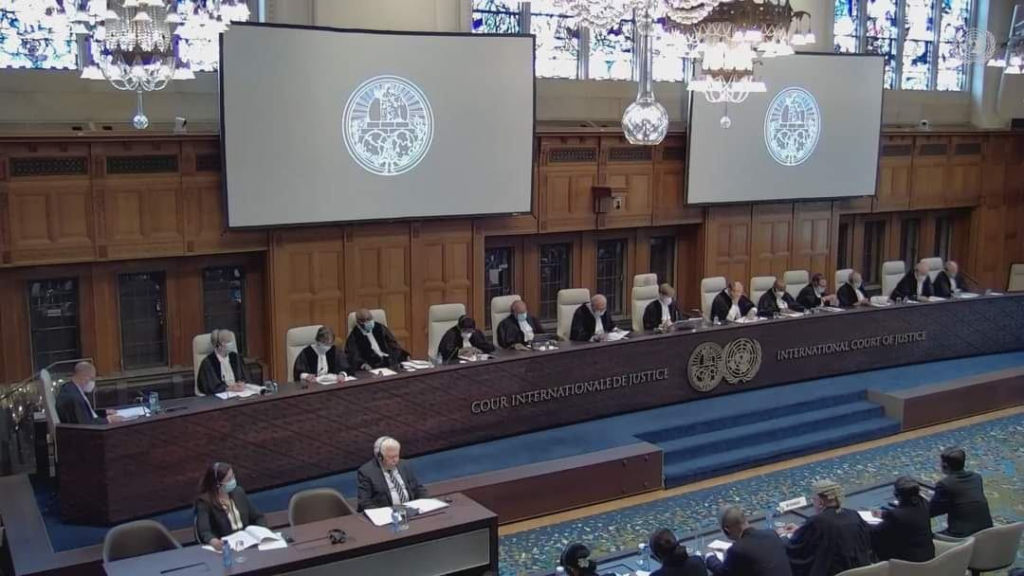 An interim decision was made today in The Hague, the headquarters of the ICJ, about the military council’s objection to the case of Myanmar and The Gambia, which has been facing the ICJ tribunal since the NLD government. The court rejected the Myanmar Military Council’s objection that the charges related to the case were invalid and ICJ finally  decided to proceed with the hearing.

The Gambia, a member state of the OIC (Organization of Islamic Countries), applied to the ICJ court headquartered in The Hague, the Netherlands, to sue Myanmar for the killing of thousands of Rohingya civilians that occurred in August and September 2017 and after the court accepted and heard the process with Myanmar started in 2019.

At that time, Daw Aung San Suu Kyi, who was considered the leader of the government during the NLD government, led a trip to the Netherlands to  face the hearing on behalf of Myanmar. The Gambia applied to the ICJ to take action as genocide for using excessive force to wipe Muslim minority, destroying villages, burning down villages, killing hundreds of civilians including women and children by the military in responding to multiple sneak attacks on dozens of police outposts in northern Rakhine by Rohingya armed groups known as ARSA.

In defending to these incidents, the NLD leadership said in an interview around that time that they did not know about the incidents of brutal clean-up operations by the military and burning down villages to make it difficult to live again. At that time, even a person like the Chairman of the Union of Myanmar Parliament did not know how the military brutally killed the Rohingya civilians in Rakhine State, and he said in an interview with the media that he only knew what the military had recorded and showed him which were some of the actions of the ARSA group, and he believed the military’s statement honestly.

It was known and heard that there were some local politicians who think that the NLD government has allowed the military to do whatever it wants, and some who believe that it was done under the excuse of national security and national interests though there might have been overused of the force .

Here, there were different views among local organizations and politicians relating to the human rights that western countries value. The birth-right citizenship and respecting human right were not equally accepted to some race or to some with different religious belief in Myanmar according to major Myanmar ethnic population. Myanmar military is playing racial and religion card to Myanmar dividing the unity of community.

Because of this incident, the government led by Daw Aung San Suu Kyi defended the military’s crimes by going to the ICJ herself and then, she lost a lot of international recognition and respect for doing so. The military portrayed themselves as army following the orders of civilian ruler under the government of the NLD at that time, and the NLD government did not seem to know exactly what was happening on the ground and it is concluded that they had decided to defend what had happened.

After the military coup, it can be said that the perpetrators (the Military leaders) has no one to use as scapegoat (Like Aung San Suu Kyi) for their crimes committed but left alone to defend themselves at ICJ.  Two minister-level persons responsible to defend the ICJ case went to face the hearing. The court decided today on their motion and interlocutory objection and continued hearing the case. This incident revealed the national extremist ideology of the military junta. Their political ideology and nationalism is based on so-called Buddhist teaching, which is practiced by the majority in Myanmar. In reality, it lacks respect for humanism and the positions based on the concept of racism. It is also a political tool to politically manipulate those who hold similar extremist view among the people of Myanmar. The military is always been playing their role as religious Buddhist crusaders protecting national interest and Myanmar majority.

There are many lessons to be learned from this incident for the pro-democracy forces. We can learn from this incident that values and standards should not be abandoned for any reason and it is important not to give up the human rights values, either because they have to make concessions to gain political power quickly or to maintain power.