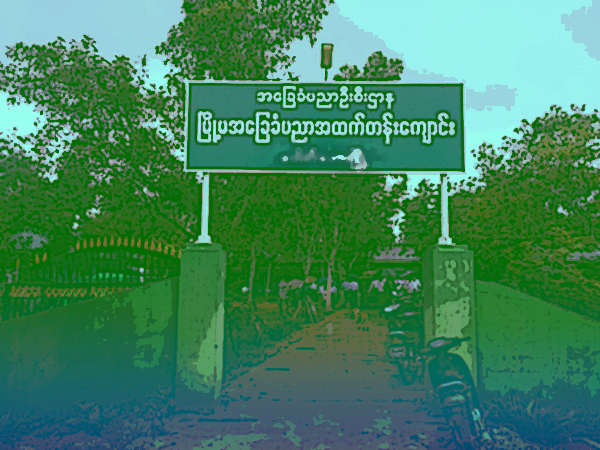 The CDM teachers who were involved in an online education program called Kaung 4 U were arrested recently by the military council. Parents who do not want their children to attend the schools under the ministry of Education of the military council, decide to give their children online education because they are worried about the safety of the schools where the students have to go in person. Parents who cannot afford several lakhs for the fees of private schools and parents who do not want to send their children to a public school under the Ministry of junta in political reason, enrolled their children to Kaung for U and such other online schools which is recognized by the NUG. It is found in some writings that there are more than 100,000 participants, and most of the teachers and the students live in the cities controlled by the local military council.

After the coup d’état, there were times when schools could not open due to the situation of covid infection and security reasons. Last year, the military council worked to re-open the schools, but soon, they were closed due to the peak of the Covid-19 pandemic, and then reopened again this academic year.

Under these conditions, education can vary according to different territories and depending who is in control. Families that can afford and with political convictions can send their children to private or online school but there are many family cannot afford private or online schooling have to choose military run school in their area. In some of the ethnic armed regions, they have already been running their ethnic religion and education systems. Among some other areas that became armed-conflict areas after the coup, like in Magway Division in central Myanmar and some regions of Sagaing, there have been news reports that CDM education staff in their areas are teaching in interim schools that are completely unrelated to the Ministry of Education of the military council. Since the regions are operating under an unstable military situation, there may be difficulties to have continuous peaceful schooling. In the cities, to some families’ incomes become very low, they can’t afford the money and time for their children’s education and children are forced to work in order to earn part of the income and you will see it happening at the lowest income level. Larger portion of poor children are forced to miss their school completely.

There may be a certain number of people who care about the education for their children and have a reasonable income, and use their savings for their children to attend private schools and private online schools. Parents who cannot afford several lakhs to pay monthly school fees for education have to choose schools run by the Ministry of Education of the military council. Due to the effects of education staff doing CDM, there is a shortage of teachers, and the parents who enroll their children to Military controlled schools know that the standard of education has dropped significantly compared to before the military took power, but it may be that they choose this in a situation where there is no other option.

Here comes the question of how much education should be related to politics as the revolutionary forces fighting against the military dictatorship.

They might say that education is subordinate to politics. Although this comment is true to a certain extent, we need to consider that there may be situations which can become extreme when this word is over-interpreted. For example, bombing the schools opened by the military council so that they cannot open again and assassinations of education staff who were non-CDMers in some areas were done by some local armed groups with the accusation of them being pillars of the military slavery education and dictatorship.

It should be based on the idea that the right to education for every child and student is a basic birthright. Instead, some fighters are using education for political-gain, dividing by political background. They are choosing which education system is to learn and which education not to learn. It is also important to make plans to help low-income families get access to education under various circumstances.

The purpose of the revolution is to fight for justice and equality as much as possible so that the weaker families have equal opportunities and they will have opportunity to raise their social rights. As education is a long-term resource and it is needed not to be weighed in the current political balance.