“All works of a poet are the meaning and the desires of the era he is living in.” 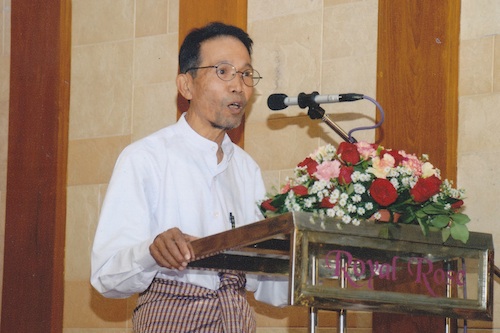 I once had an unsuccessful dream to publish a magazine in Burma. When I applied to the Press Scrutiny and Registration Division (PSRD) to publish the magazine in 2006, they told me that I couldn’t receive permission because all of the people in the editorial staff were former political prisoners, and no government organization had recommended me.

One of the members of the unsuccessful magazine’s editorial staff was Maung Aung Pwint. He was always smiling, and through this smile you could see he had a kind heart. He has been writing poetry since 1968 but has lived with poetry his whole life. I asked him about his life as a poet and he said, “All works of a poet are the meaning and the desires of the era he is living in.”

But Maung Aung Pwint did not write only his desires. He also shared people’s feelings to try and make the authorities aware of them. Because of this, he was imprisoned many times.

During the 1988 uprising in Burma, Maung Aung Pwint acted as the joint secretary for the People’s Peaceful Demonstration Committee of the Delta region. After the government cracked down on the protests, he joined a media group and documented the lives of Burma’s people through videos and photographs. The authorities banned his work in 1996. On November 4, 1999, Maung Aung Pwint was arrested and sentenced to eight years in prison on the charges of “illegal possession of a fax machine” and “sending news” to foreign media organizations.

Later, he received several awards for his work, including the 2001 Hellman/Hammett Grant for writers, sponsored by Human Rights Watch, and the 2004 International Press Freedom Award from the US- based Committee to Protect Journalists.

In 2011, when I tried to publish a magazine again, this time online in America, I called him. He said, “Although we didn’t have a chance to work together, I am always ready to help your work for literature.”

Though we are personally close and feel the same way about literature and about our people, we haven’t had the chance to work together because the online magazine in America could not be published. Still Maung Aung Pwint encouraged me, despite my lack of success. “A poet writing poetry is doing his duty,” he said.

As a dutiful citizen who has been writing poetry for over forty years, he deeply believes that writing about peoples’ feelings is doing something for truth and justice. I would like to honor him by sharing a paragraph from a statement that he released in 2010.

“Modern poetry believes, respects, and admires the fact that history doesn’t excuse people who are late. But doing something for truth and justice is never too late. A person who has integrity, who is patient, and who loves peace will not face an ocean with no shore.”

Maung Aung Pwint has also said that a poet who empathizes and feels, shares the people’s perspective. His life has been frequently spent in jail because he shares the feelings of the Burmese people. If I call him the people’s poet, is there anyone who will disagree with me?