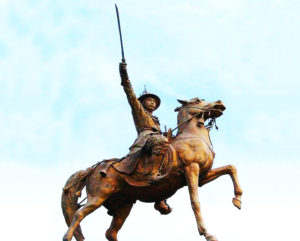 Maha Banddoola was standing at one of the observation towers of the Danuphyu fortress , the last stronghold of the heroic Myanmar partisans.The camp fires of the forces could be seen against the darkness.It was difficult to see where the horizon ended and the sky began on that particular moonless and starry night.

They say the battle was already lost.

Tomorrow would only be the confirmation.

Of course, Maha Bandoola knew that already. All who fought for lost causes knew that too. But that didn’t stop them from fighting for they believed to be the just cause.

Maha Bandoola was talking to his second in command, Bo Thura Kyawzar who, he noticed much later, had fallen asleep against the wall.

Only now, did he realize that it was the first time he saw Bo Thura fall asleep. Now, he wondered whether Bo Thura slept at all. Bo Thura was always with him when he supervised the troops, he was with him in battle. ln short, Bo Thura was always there when he needed him, so that his presence had been taken for granted. Whenever Maha Bandoola woke up , he found Bo Thura watching over him. Now, his physical weakness must have overcome his mental state. Bo Thura had fallen asleep even in his standing position.

Sleep, brother, sleep,
Sleep while you can,
For now , sleep is just
The death of each day’s life.
But tomorrow , who knows ?
May come the final sleep
From which you may not wake.