Days passed so slowly. Passing days are the longest days for me. Longest second, longest minute, longest hour, longest day, and longest night I could never suffered more. Suffering is a very long moment. For me, time itself does not progress. Now, one month goes over. The twenty-sixth April comes as the time wheels around. 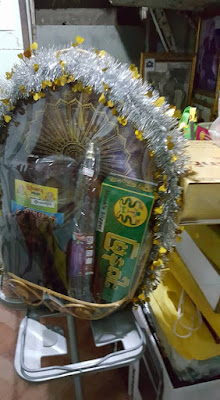 (Offering yellow robe at the monastery, it was the act of good deed.)

As Buddhists do, I went to the Sunlun Monastery to pay respect Sunlun Sayadaw, and offering yellow robe, and offering meals to all the monks, and the guests that I invited for the one month passing anniversary of my dear mother. All those ku-tho (good deeds) might comfort me a little, or doing meditation might change my mind clear, and strong. 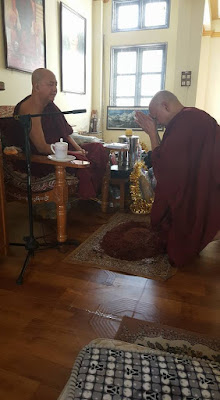 (My twin brother became a temporary monk under the guidance of the Sunlun Sayadaw, obeying the laws of monkhood, and meditating included.)

Remembering back to the day, after 7 days my mother passed away, my twin brother became a temporary monk to express his gratitude to our dear mother. I,…. I could not do such noble deed. That was because I was not a man or I was not born as a boy at the beginning of my life. In the Buddhist way of life, being a girl, or a woman prohibited her from doing noble deeds that boys/men do. For example, girls/women are prohibited to ascend the upper part of Shwedagon pagoda, etc.

Life will go on in spite of the tragedy that had struck to us. I wished all the days-sufferings became a nightmare, and I would wake up from this terrible dream. Although time can cure all as people say, we will never be back to normal again.