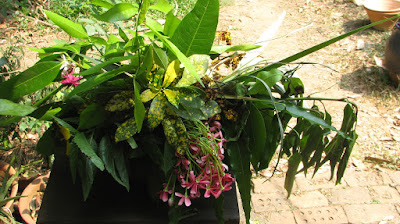 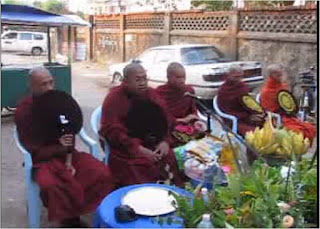 (Monks are invited from each street to recite Paritta- Suttas. There seven-day-born flowers and leaves are offered in front of the venerable monks.)

Holidays are continuing after three days of Thingyan Festival. People continued their good deeds including buying live-fishes from the market, and free them into the river, or free the caged-birds into the sky, and inviting monks to recite Paritta Suttas – Holy Discourse of Protection in their homes, or offices, or streets, and listened to the recital of Paritta Suttas respectively. For those doing good deeds, people have to offer seven-day-born flowers and leaves and the pot in front of the alter of Buddha. 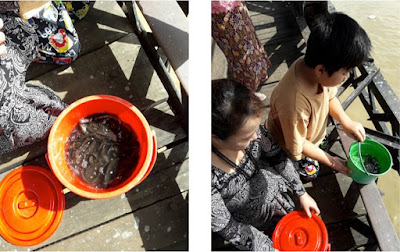 (People brought live-fishes, and free them into the water, wishing all the seven-day-born will be free, and well for those good deeds.) 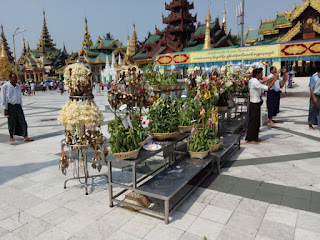 (Also at the Shwedagon Pagoda where Buddha relics are enshrined, seven-day-born pots are organized beautifully, and honorably.) 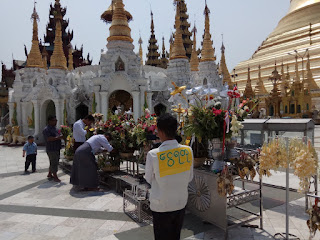 (Flowers, and leaves, also have colourfuls, and meaningfuls are organized.)

I was going to the Shwedagon pagoda during Thingyan holidays. I saw people were crowded on the pagoda ground. Some meditating, some offering candles, flowers, and colourful things, and some paid respect, etc. 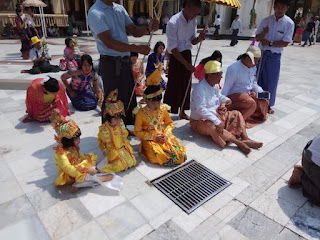 (The families with their little boys, and girls altogether having good deeds at the Shwedagon Pagoda.) 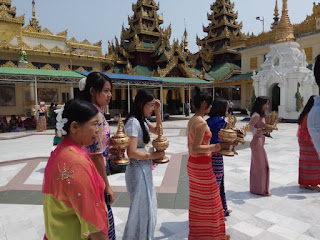 I also saw families came and paid respect Shwedagon Pagoda for their novitiation (becoming monks) ceremony. Their little boys wore princely robes before heads shave, and their little girls with princess dresses. There I saw young girls wore in the style of old Burmese court dress. Each holds golden bowl at their front. It was a style still cherished especially in the country religious ceremony. The scene was truly admirable.