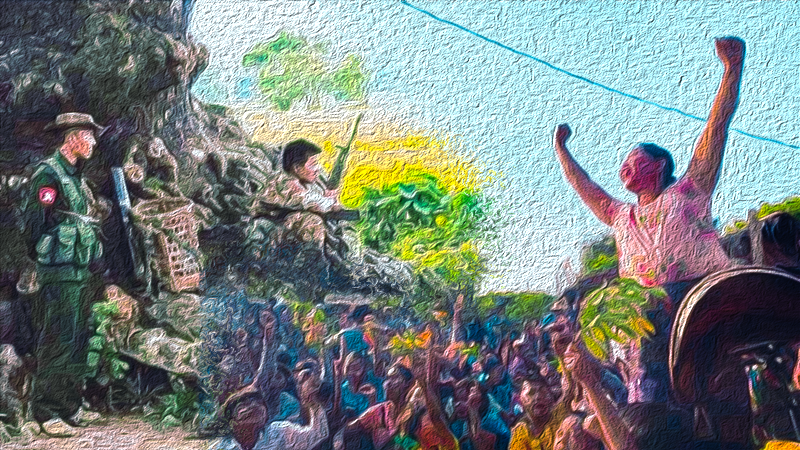 What will be needed to defeat the military council?

In the Myanmar’s political history of the post-independence period, the military gradually gained political power by attempting military coups and transferring power with time limitations for one time and military coups for 3 times. The country’s power has been controlled by the military for decades, and a civil war based on political ideology and armed attacks for the rights of ethnic groups has been waging for more than 7 decades. The civil war was waging in parallel to the history of Myanmar’s independence, and every time a coup occurred, it added fuel to armed conflicts to escalate. During more than 7 decades, many peace talks have been held, but it can be seen that they have not been able to reach a political discussion to find a solution to the civil war based on political issues, or even when some opportunities have arisen during the political discussion, they did not get a big solution because the rights of self-determination and governance of the ethnic groups on an equal basis were not included.

The Stimson Center of the United States sponsored an online discussion about Myanmar politics these days, with most of the international professionals and some Myanmar professionals. RFA news reported about the discussion of international university professors and researchers studying Myanmar affairs with the title that there is a need for trust and cooperation. I understand that “the trust” in the title that summarizes the topics discussed at the meeting refers to the need for trust between the organizations opposing the military council, i.e. between the ethnic armed organizations and the NUG, CRPH, and NUCC. The next key word, “cooperation”, means that there is still a need for cooperation between the political and military organizations opposing the military council.

For the keyword “trust,” the main question is that why there is still a need to build trust. To have trust, we need each group to have the same goals and objectives, the same values, norms, and policies, to deal with each other in an equal setting, to have no incidents of conflict in the past between one group and another, and if there are, apologies for the past events and remedial action by the perpetrating group will be required for the damage done.

It is also not natural that winning the military council is kept first, keeping the distrust and suspicions relating to past incidents second and third. Adequate review of past events and apologies are essential before moving forward into the future.

It is also a key point to have enough weapons and strategic type of weapons to win with military force. The main background reason for military cooperation will be the need of political consensus and the common political goal or interest among armed organizations.

Solving these issues is easier said than done, but it is not something that can be done overnight. These are the things that we must be constantly trying. These are the things that we must constantly strive for and the important needs that must be met, so with the military coup that has reached almost 2 years, I would like to say that it is time to review how far we have come and what needs to be met.

← The role of political parties in participating the 2023 election or not
The leader of the military council attended the Chinese New Year ceremony; War is still waging in Sagaing →