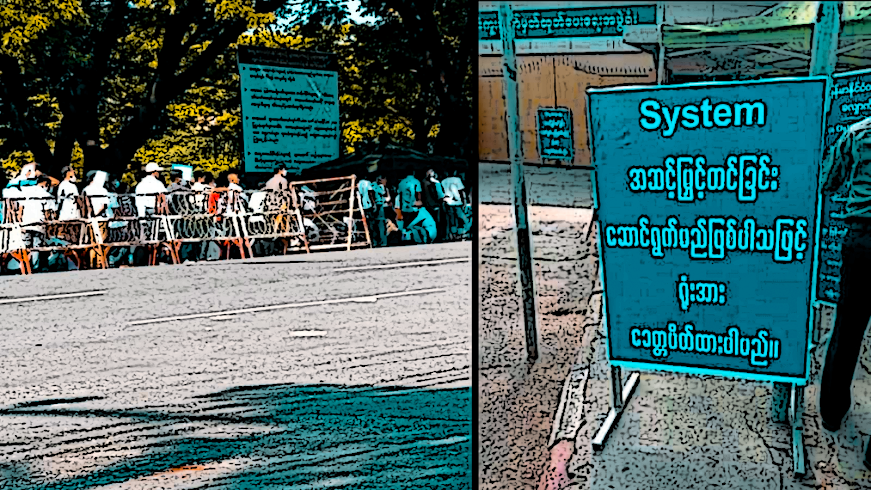 Following the military coup in Myanmar, there has been a significant increase in the number of people leaving to live and work abroad in search of employment opportunities and lack of security. Every day, 2,000 to 3,000 people queue at Yangon’s passport office to apply for passports and such an event has been going on for months. In this situation, the military council abruptly announced on January 2 that the process of issuing passports had been suspended, and although it is still being processed for a small number of pilgrims and those seeking emergency medical treatment abroad, more than 2 weeks later, on January 17, there was further news that all those who will work abroad under the MOU, pilgrim groups, and those going for emergency medical treatment will no longer be allowed to do so.

This news will cause concern and inconvenience for those who plan to work abroad in Myanmar but have not yet obtained a passport or whose passport has expired, as well as those who plan to live abroad for other reasons. Although not a complete ban on travel abroad, the months-long suspension of passport issuance and renewals has resulted in confinement for those without passports and increased concerns.

This has led to concerns that whether the military council will soon tighten restrictions on travel abroad like the previous Myanmar Socialist Party government times.

When considering whether the military council is likely to act as feared above, in this period of military coup and rising political dissatisfaction, not allowing citizens to leave abroad and controlling them internally can only create economic, political and social instability, and will not bring them any benefits. Blocking not only those who are politically dissatisfied but also those who are seeking economic opportunities will only increase the political pressure on the military council in the country. Even those who are uninterested in politics can turn their economic discontent into political discontent as their employment and educational opportunities are being restricted.

Allowing those who want to work abroad and those who are politically dissatisfied with the military council to leave abroad, in other words, opens up domestic pressure on the military council, and earns foreign currency from the wages sent back to the country by the working people, so there is little possibility of blocking the right to leave the country like in the old Masala era. At the time, it was done with the intention of cutting off people’s contact with the outside world, and because the spread of information was not good in the absence of the internet, the government of Masala obtained some results, but in this age of the internet, it is no longer possible to block people in Myanmar from contacting the outside world.

During the current suspension, the people profiting are the military officers of the military council, the staff closely linked with the passport office, the bribe takers in the offices, and the corrupt community. It has become the same as during the previous military rule, in which bribes needed to be paid in order to get a passport. Some observers have commented that if it is released again, the corruption and bribery of the military council will become numerous.

Based on these facts, it can be assumed that there is possibility that the military council will not be able to prevent those from taking jobs abroad.

← Battles in Katha Township with 7 people killed by aerial bombardment; Relationship between Myanmar military and Thai Army
The role of political parties in participating the 2023 election or not →