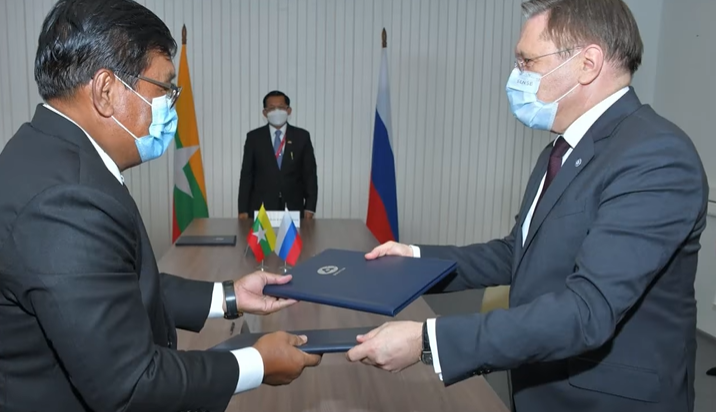 On the Russia trip of the military council’s leader, he is very happy upon meeting with Russian President Putin and it is clearly seen in the photos and videos of the news. He personally attended the East Economic Forum held in Russia because he wanted to dispel the rumors that they were not recognized in the international diplomatic field. Besides a chance to meet the Russian president and wanting to show that they were not being excluded diplomatically, there were other purposes of asking for help and to discuss issues such as fuel, the possibility on the use of foreign currency and the purchase of arms with Russia.

Due to the increase in fuel prices in the world, fuel prices have also increased domestically, and in recent months, the value of the Myanmar currency has dropped significantly, due to restrictions and control of the use of foreign currency or the lack of foreign currency due to the expenses of the war. This will further increase fuel prices, affecting all domestic manufacturing, economy, agriculture and fisheries. Therefore, the military council intended to reduce this economic impact by buying oil from Russia, which will be a little cheaper than the current oil.

On the other hand, due to the unstable security situation in many regions of Myanmar, when the military council and some armed groups imposed restrictions on travel routes, the transportation of goods and trade was affected, the cost of living was increased and people were faced with exorbitant prices of products. In some regions of Chin State, in many regions of Kayah state and Sagaing Division, basic food, medicine and fuel were bought at unprecedented prices. Commodity prices and living costs are rising due to actions of the army that has taken over power, prioritizing only on security and weapons control, block and cut tactics.

It was not because of the choice of dollar or ruble currency and not because of whether there was international recognition. It was only the effect of the decisions, orders and restrictions of dictators who put power first.

Therefore, the military council leader’s trip to Russia will not increase his prestige in the international diplomatic field, and showing a closer relationship with Russia, which is a military threat to Western European countries, is likely to have only negative consequences for Myanmar.

Some observers have assessed the election as a political outlet for the military council. It is believed that the military council will make a certain political party that will be able to control more than 25 percent of the political power and bring the interests of the military forward in the election. The fabricated election’s success would show the world that the Military handed over power to that elected government and continue to control the power from behind. In other words, if it is like the scenario of 2010 election where ex-general became President, then it can be compared to a certain extent.

There will be a sense that they would support by providing favorable conditions for a pro-military big party that they want to win with other allied parties and trying to create the name of an elected government.

If such a situation could not be directed, the armed conflict would become more intense than it is now and, in some ethnic states, it may become a situation where the military council relinquishes both administrative and territorial control. If this happened, the military council would not even choose a method such as using the constitution and forming a civilian nominal government, and they would continue to control and administer power as needed by showing more brutal force.

The military council may think that the 2023 election can be compared to the 2010 election to create a desired situation, but the current situation is that 2023 is no longer a situation where people will accept the lesser evil like in 2010 elected regime from a positive expectation. However the situation is different from 2010, as it is a time when confidence in the election method is at its lowest, in a situation where there are widespread armed attacks in all parts of the country demanding the Myanmar Military to step down.