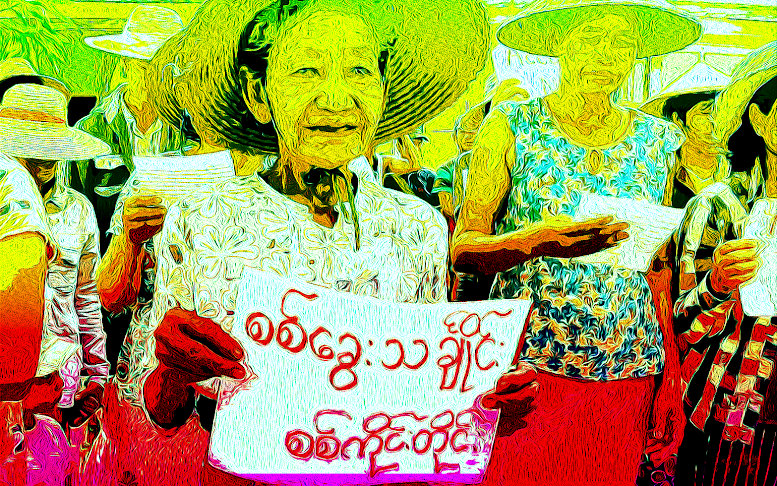 In the news of shootings and explosion, there was no more information about who carried out the shooting or explosion. Also, in the news of the shooting, there was no more information about the probable group involved or the time, and only the date was included. It seemed assumed that all the audiences had already knew which organizations were performing the shootings or explosions. On the other hand, the journalists assumed that it is not worthwhile to investigate about which organizations involved and cause behind it so they only just report the information that was already readily avialable.

Similarly, in the news, 100-houses heads, ward or village administrators being shot to death, the journalists did not investigate and confirm issues such as if the victims were actual informants or not and rather they reported what the sources told them “as is”. Mostly, the sources were the people involved in the incident. Since the news sources were not independent third parties, the news reports were provided by one of the two sides involved.

After the military coup, due to restrictions, repression, one-sided punishments, the military-influenced courts and most of public organizations that no longer held accountability, it has become difficult for the news media to fully investigate for information & facts. On the other hand, political biases have started to take sides, and reporting of independent news has become rarer because some news is no longer searched for and the media itself is taking sides even though the media is aware of the possibility that the news source may be biased.

As for audiences, they want to listen to and read news reports with emotion and bias, rather than accurate, valid and independent news reports. So, we are seeing more and more declines in information accuracy, validity and quality.

Although the news of hundreds of thousands of people fleeing the war, news of insufficient food and medicine, and news of losing houses were reported, people are in a difficult position where they can help such victims. Even though the people were able to help each other during a natural disaster like Cyclone Nargis and a disease disaster like the COVID crisis, they were unable to help each other in the midst of armed conflicts and during the economic downturn. Also, the international organizations are not in a situation where they can freely go and help.

Refugee camps in some areas can’t even be called camps and, even though we have heard in the news that they were living temporarily in the forest, the community is in a position where they cannot help because of their own problems.

After the military coup at the beginning of last year, according to figures that monitor and record the information in the news, thousands of people have died as a result of armed conflicts, war, arrests and killings. The numbers of people who died due to weapons and brutal killings are obvious, but there were people who died because they could not get medical treatment while fleeing the war, due to the fear of being tortured and killed in conflict and economic conditions. There were also people who died in the COVID epidemic that hit the whole country at this time last year. The numbers of their deaths are unknown because they are not recorded and collected. However, tens of thousands of human lives were lost in the rainy season of last year, so if we add the above number of people who lost their lives as a result of armed conflicts and fleeing war, it may be more of hundreds of thousands.

These are obscure numbers and may also be called neglected numbers.

← Daily Local News In Brief – September 7, 2022 (Evening)
Nuclear Energy Treaty in Russia visit, Promise on Election to be held in 2023 →