I had the fear of tests or exams. I remembered I had a lot of anxiety for exams in my childhood memory. I could not keep calm before or during the exam. It might because I did not study or prepare well. Sayadaw U Vinaya (Meditation Master, and Former Venerable Monk, head of Kabaraye Sunlun Gu Kyaung Vipassana Meditation Centre) encouraged us to practice meditation before the examination day. I believe it refreshed my brain. But it could not wash away my fear. (I still was afraid of examination although I did meditation regularly.) It would not give me good marks in the examination. (I even failed the exam however I do practice meditation every day.) But those unlucky happenings could not move away my habit of doing meditation. 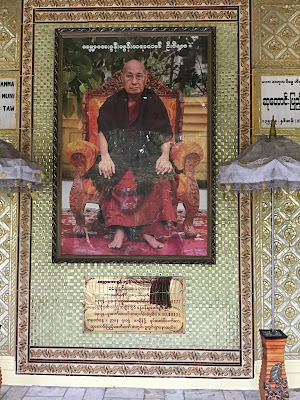 (The Photo of Sayadaw U Vinaya in the Monastery compound for all yogis to pay respect. His body relic is enshrined in this Pagoda.)

Sometimes I thought why I was doing to practice meditation. It seemed like torturing myself. Had to sit cross legs, shut tight our mouth and eyes, nor rest whether fatigued, nor scratch an itch, and not to move nor change position during the time of meditation. But the happiest moment was when the final bell rang. Whether I do obey or not whatever the Meditation Master said, I do really happy when the time’s up. At that moment, I witnessed the feeling of my mind fresh and clear. But I said myself every time ended the session, ‘This is the last time I shall ever do this.. never again…’ No one has forced me to do this sitting.

We practised meditation either at home or at the Monastery. Sometimes we missed doing practising meditation for a long time. But we do not forget to do it whenever we wanted to do. I became to realize that the pain on my body did not stay still all the time of meditation. However I could not hold the pain and I wanted to change position, I tried my body stays still and waited, hoping the pain would disappear a little bit. But unfortunately, the pain increased instead of decreased. (What a life of meditation!) 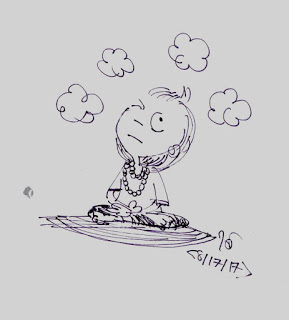 One Year and A Half Ago

When my mother passed away, my brother became a temporary monk for three days as the way to express his gratitude to our dear mother by the way of Buddhist life at the Sunlun Gukyaung Vipassana Meditation Centre. I envied him so much, but I could not do such a noble deed because I was not a man like him. That was only boys and men could do. At that time we all together practised meditation at the Sunlun GuKyaung monastery for all four days. My brother suggested to father that we should continue to practice meditation after the four days. Father promised him instantly. I was surprised to hear that! Since then we went to the Sunlun monastery, and have been doing practising meditation until now.

During the time of meditation, when the pain arisen in the body, I said myself that the physical pain I now suffering could not compare with the pain in my heart. Losing my mom was the most miserable, and painful to me. Why would I try to change my position to release my physical pain a little? I was wet with tears not because of my physical pain. Thinking my life would go on without my mother was the most painful to me. I even did not want to open my eyes when the final bell rang. I did not want to face the real world. That thought brought my mind to endure strongly against the physical pain on my body during the time of meditation. 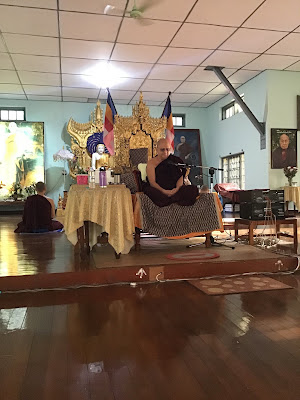 (‘For total 100 minutes; 50 minutes for breathing hard, and another 50 minutes for keeping full mindfulness in pain (sensation of pain, cramp, ache, numbness, heat or cool) that would happen during meditating until the time completed.’)

Now we have one and a half years today from the day my mother passed away. We still went to Kabaraye Sunlun Gu Kyaung Vipassana Meditation Centre twice/ (sometimes) three times per week, and practised meditation. As an adult, however the pain had arisen in the body during the time of meditation, I said myself that it was just a physical pain, and it would finish when the time was up. So be patient!

After the final bell rang, I always paid respect with my hands clasped palm to palm and said “Ah-mhya’ (Come and Share) to my grandparents, and my mother who hear it, and to say ‘Tha-du’ (Well Done!) with me. That was the only way to express my gratitude to my dear grandpa, grandma, my mother, and to all my loved ones (seen or unseen). That was the reason I had to do meditation regularly and had to do it well.

However we decided to go to the Sunlun monastery and to practice meditation regularly, I still was afraid to sitting and do meditation. I still did not know today sitting would be better or would be worse. If today is not going well, maybe tomorrow is another day.

← My Life Will Go On 35: I Would Be Strong For Those Who Love Me by Junior Win
Kha Htaine Donation by Junior Win →