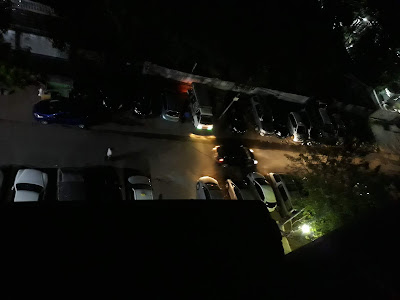 (The night view from the hospital.)

My only twin brother returned to his work just a few weeks ago before mother was sick. He could not come back instantly and help me at that time. Father decided to stay beside his beloved wife since she was sent to the hospital for having her medical care. I was alone doing taking care of my mother and father, not a second to miss my duties at all. My aunts and my cousins sometimes brought a lunch and helped me at the hospital. I believed mother would be well, and recovered soon. Hope springs eternal in the human breast. I had no thought to be prepared for the worst. 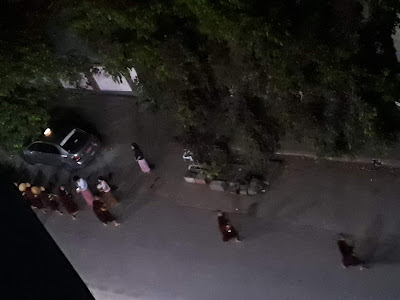 (On a special day, I saw people were offering meals to the monks at 5:00 AM, viewing from the window of the 7th floor of the hospital.)

I could not cook well. I was just a helper while mother was cooking. I made many mistakes if she let me do all alone. I still do not know how to put away covers of shrimps. Their claws always cut my fingers. I burn my hands by fire or heat on the stove or were injured by a knife during my cooking for a meal. Mother always said what if I had a husband, mother-in-law would have scolded me all the time for my carelessness and clumsiness. (Well..mother, don’t worry. 😀😀😀) While mother was kept at the hospital for having treatment, I took all the household chores including cooking for my parents. I obeyed what doctors requested for her diet. I learnt cooking and wrote down in detail; the methods for cooking from my aunts, my cousins, and even from the meat-vegetables-sellers. 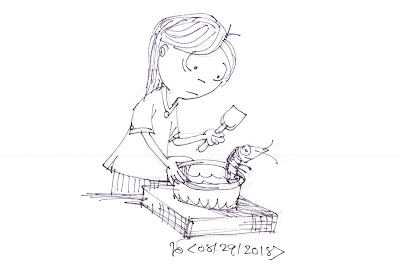 (I should have to cook well for my family.) (drawn by Maung Yit.)

Mother returned home after her treatment from the hospital. She looked healthier and well. I thought she would be in best health in a few days. However I was struggling in my busy time and could not have a full rest, I was writing ‘The Road I Became Familiar With’ (Writer on board) in Burmese as I marked it in my diary. When the editor of the magazine I regularly wrote asked my article, I gave it without thinking. I thought when this article would appear, mother could have read it by herself. But mother left me three weeks after she returned home in the cause of heart failure. It was the most difficult time. I suddenly faced the unexpected crisis. I had not planned for the worst. I never thought of my life living without my mother. Although my heart was broken into pieces and could not have a strength to stand even on my knees, I made my mind I had to stay strong beside my father. I even could not let my tears out in front of my father until my brother and his family arrived.

When my mother passed away, I had my regret for the article I wrote; ‘The road I became familiar with’. I thought it should be my last one. I was now too tired, and too busy, and too distracted with work, and with life – I heard my mother’s words – ‘write more in English, my dear daughter.’ – refusing to be ignored. I let the words, I write, I must. You would say that how can I be a writer, and a daughter, sister, aunt, housekeeper, gardener, a cook in a same time? It seemed that it would not be possible. But it is my destiny my life will have to go to be … 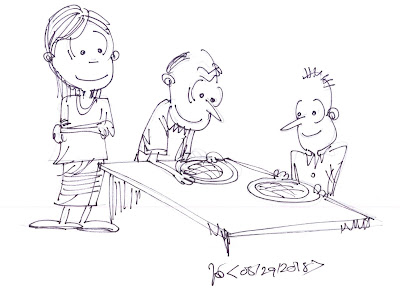 (I tried my best to cook, so they tried their best to eat.) 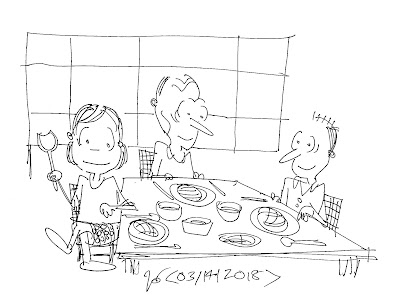 (‘Everyone might cheer up at the sight of the funny and delightful supper.’)

I let my mind try to focus on cooking and cooking. Writing becomes a second priority. I always cook simply, and easy. Luckily father like whatever I cook. My brother also enjoys my cooking. Considering what dishes will be today or tomorrow gives a challenge to me.