On  9th May of 2015, marked the hundredth anniversary of my grandparents held in our Pyay Yeik Thar house, Pyay Road in Rangoon, Burma.

Mytwin brother, Maung Yit, cartoonist and writer had a plan to display photos of thecontemporary writers, poets, cartoonist, and artists of our grandparents’ days in the garden. He collected photos of (approximately) 80 people (writers,journalists, poets, and artists, etc) as much as he could find.

Ten boards were borrowed from his friend who was a publisher of Doo Wun publication house. Before that day, he and his friends hung all the photos on each board.
Firstly he chose the photos of our grandparents, and the other three people who also reached their age to hundred in 2015; namely as Bogyoke Aung San (our national
hero), Bo Aung Kyaw (student leader), and Ludu Daw Ah Mar (writer). (Here, Daw Yee Kyaine – a writer – also reached 100 in 2015. But he could not find her photo in time.) 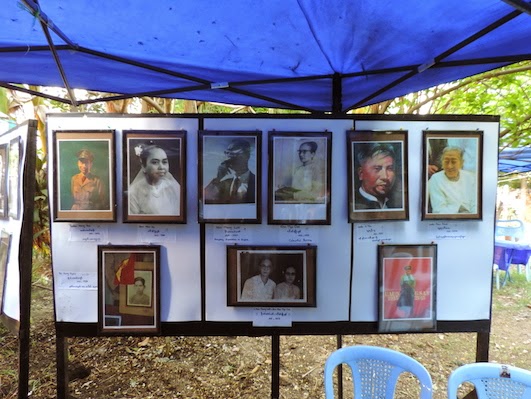 (A board belongs to my grandparents (middle), Bogyoke Aung San and his wife (left), and Ludu U Hla and Ludu Daw Ah Mar (right), and Bo Aung Kyaw (left below).)
He chose carefully six or eight people as one group for each board. He said each group represented as writers group, or cartoonists group, or artists group, or Burmese scholars groups, or poets group, or politicians group, etc. 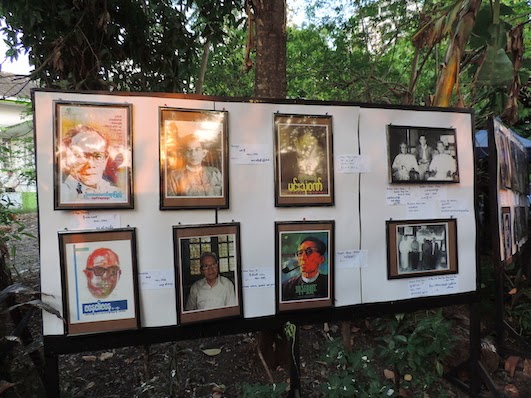 (Photos speak a thousand words.)
We invited our relatives, and friends especially those who were interested in our grandparents’ centurion, and some medias who requested us to come and take records. We were happy to welcome all. We gave my book ‘A Memory of My grandparents’ to all the guests as present. (My book appeared on 1st May of 2015.) 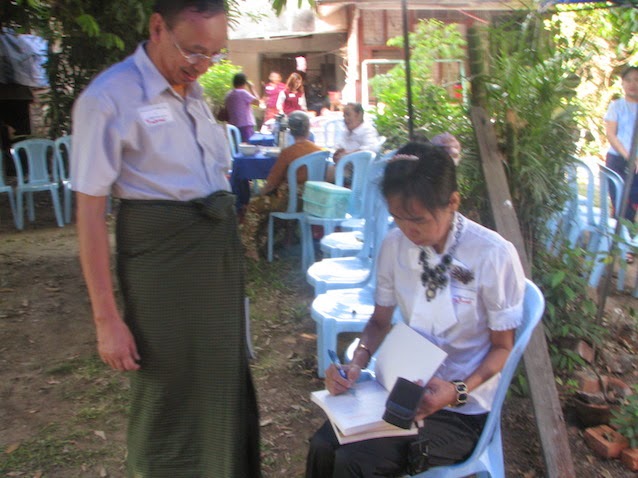 (I
was quite happy in a moment if someone asked my autograph for my book.)
All the visitors were surprised to meet the photos of old writers, poets, cartoonists, and artists shown on 10 boards in one place. They enjoyed walking and wondering around. I felt those old memories/photos of men and women writers came alive and blooming in this wonderland. 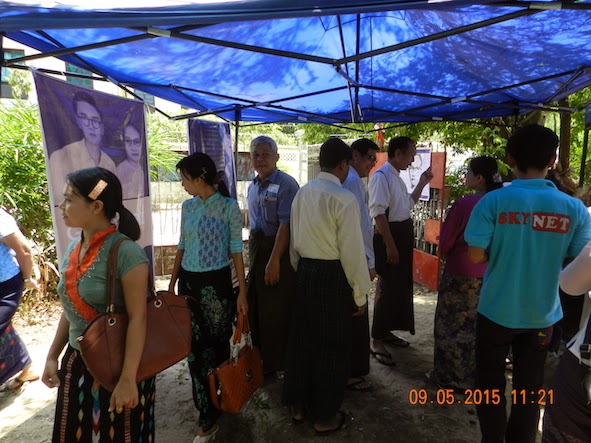 (All the visitors enjoyed walking and wondering around. ) 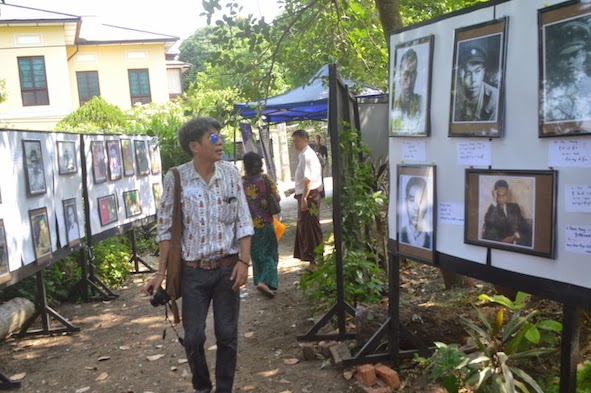 (Those old memories/photos of men and women writers came alive and blooming in this wonderland. )

Among the guests; General Tin Oo arrived in time, and gave a speech to the audience. He related some old memories of wartime Burma. He still remembered how he met
my grandma, Khin Myo Chit while he was serving as a soldier in the army. 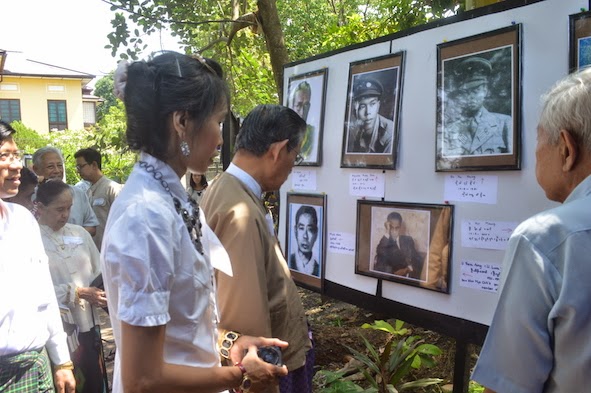 (General Tin Oo arrived in time. While I showed photos, he looked at the photo of my granduncle who was called communist, went underground after the Japs regime, and returned home in 1991.) 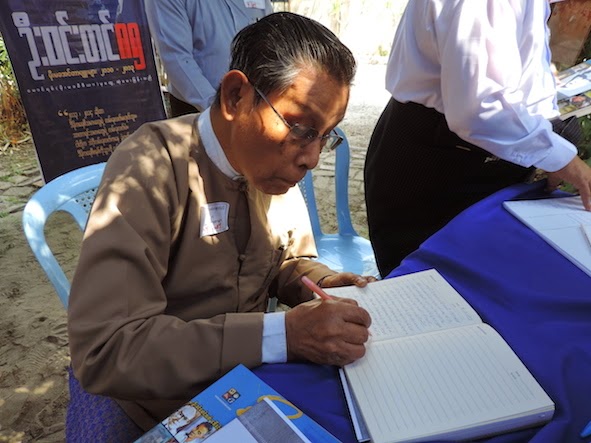 (General Tin Oo wrote a note which remembered the memory of my grandparents.)
U Moe Thu who was a writer, and director said that he was happy to attend this 100th anniversary of our grandparents. He felt so happy to be here, and meeting with old and young people. 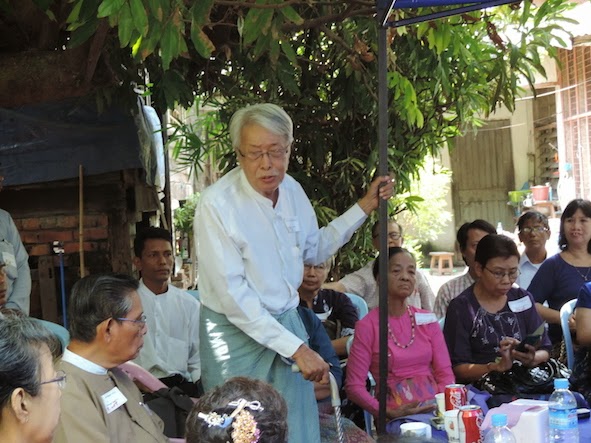 (U Moe Thu said he was so happy to meet old and young people here.)
My father also related to the audience that what his mother, Khin Myo Chit worked near Bogyoke Aung San with unforgettable memories as ‘In the Japs regime, the word ‘What a chance!’ spoken by Bogyoke
Aung San made her heart chilled. She was alarmed whenever Bogyoke Aung San said to her as “Hay! Ma Khin Mya (my grandma’s name). What a chance! Take this letter and send to ‘…’.” Grandma obeyed what Bogyoke Aung San asked. She said to her family that such a three words ‘What a chance!’ frightened her so much. You see, in the wartime, if Japanese found this letter in her hand, she would be sent to jail, and tortured.’ 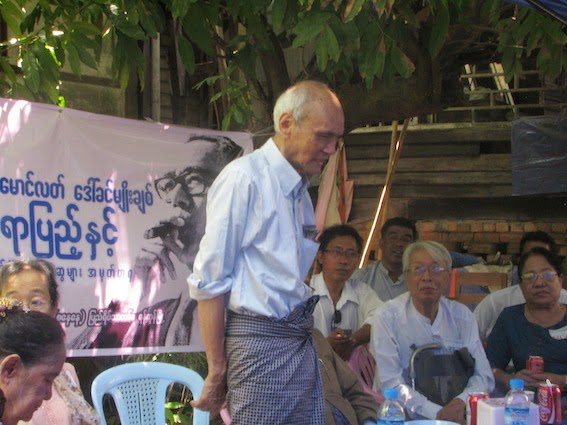 (My father said, such a three words ‘What a chance!’ how thrilled his mother’s heart in wartime.)

My mother talked about this 100th anniversary held by the family with pleasure. She encouraged some young writers to read English books as my grandma said.

My twin brother said that this 100th anniversary held not only for our grandparents, but also for other contemporary writers, journalists, politicians, etc whose photos were shown here, some who already reached 100,  and some had not reached 100 yet. He wanted to show these old photos to the guests and let it imagine that they altogether fought for Independence.
Headded that Bogyoke Aung San was not a Superman. With those people and they altogether did what their duty goes, and gained the Independence. 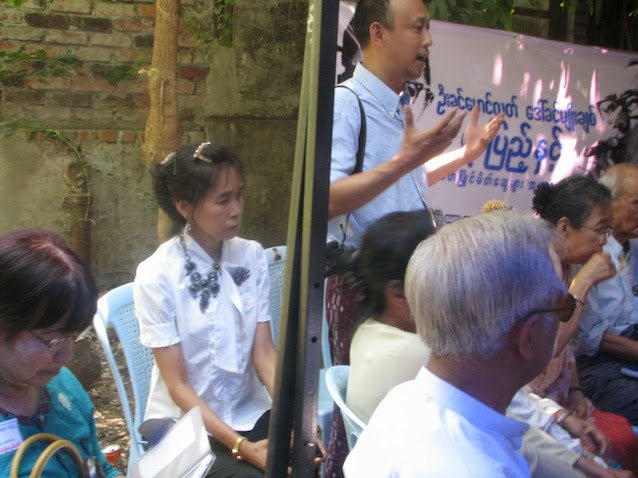 (He said Bogyoke Aung San was not a Superman. He and his faithful friends and comrades altogether fought for Independence.)
When my turn came, I said I preferred writing in English because I felt free since I have been starting writing in English at my blog during 2011 and 2012. I thanked to all who came and attended my grandparents’ 100th Anniversary for their care and love. I felt my grandparents see us from heaven, and share our loving deed. 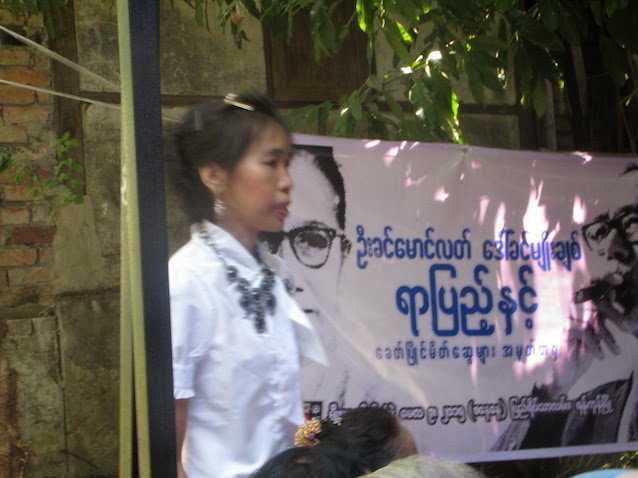 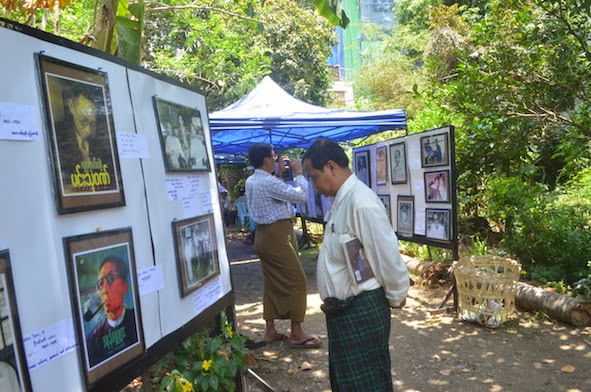 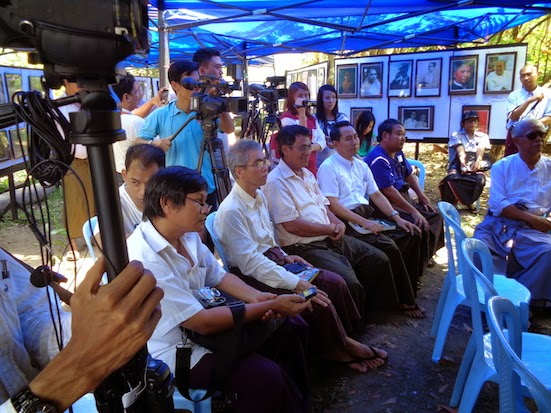 (The audience and the media.) 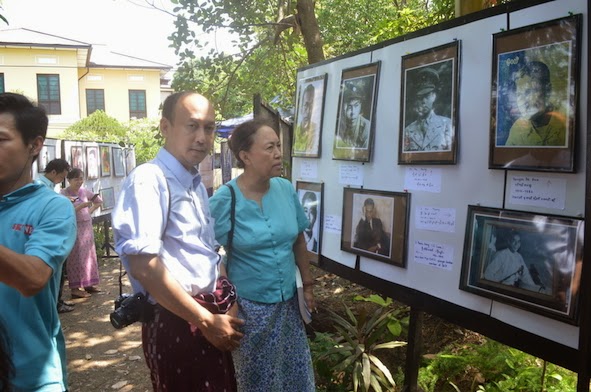 (My brother with the daughter of Bo Let Yar (one of thirty comrades in wartime) – Dr Khin Let Yar. She might be looking at the photo of her father.)
We welcomed to all whom we could see – (I mean our guests), and to whom we could not see – (I mean the people in the photos including my grandparents) – hope they all come and meet here, and share our happiness in this place where their old memories are still warm and alive– in this Pyay Yeik Thar house. 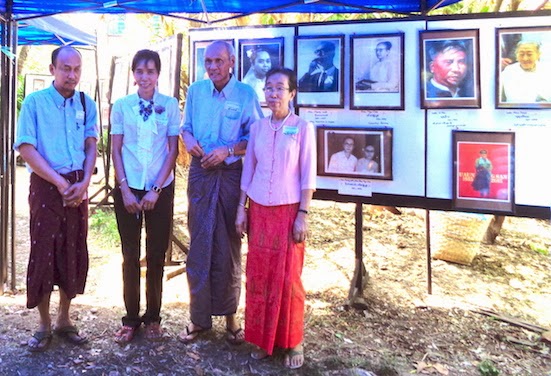