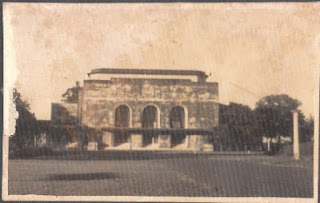 (Photo – This photo was taken by my father, Dr.Khin MaungWin before 1960 with his box camera which is now history.)
One evening I was sitting, watching the splendor stage-show of the night that welcomed the coming 100th anniversary of the University to the year 2020. The songs and music were immensely wonderful even they were once popular old songs of the University. The audience was attracted by songs and tunes which could draw their eyes to wet. The background of the stage was pictured with the convocation hall, jet-sun church, thit-poke-pin (the significant tree) and some remarkable coffee shops of their times. The songs reminded us the beautiful places of the University.
The Once Golden Age of the University
Let’s go back to the time where the University once stood fresh and active before the years of 1964.
Students Union, The Elections, The dinner parties held in Hostels, debate or discussion among the University students, Science Exhibitions, Play Readings, University Fine Arts Theatres, Buddhism and Political Science Departments were the interesting events that we had never seen in our University life.
Epilogue
I remembered when my grandparents taught us the Shakespeare’s plays such as Julius Caesar, Macbeth, etc, they organized the play reading and make discussion about the story. My grandfather said we should know such valuable knowledge that disappeared in the University after 1964. I wondered if it gave valuable knowledge, why it was no longer teaching in the University after 1964.