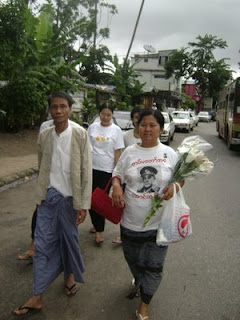 It was reported that along the road to Martyrs’ Mausoleum, armed security forces and plain-clothes intelligence officers were heavily placed and keeping eyes on the attending audience coming there to pay respect to the fallen independence leaders of Burma.

Some witnesses told that the Burmese regime was playing scare tactics on its own people and Burmese wearing Burmese national dress (brown color cotton coat) or T-shirt showing the photo of Bogyoke Aung San (National Leader and Father of Aung San Suu Kyi) were frequently stopped, questioned and disturbed from their peaceful trip to the mausoleum by the Junta’s security people.

One of the group led by Naw Ohn Hla, one of the well-known daring opposition activists who was used to organize praying service to free Daw Aung San Suu Kyi, was also stopped and harassed by the Junta’s security forces, some witnesses told MoeMaKa.