U Htin Kyaw, a longtime confidant of Daw Aung San Suu Kyi was made known on Thursday as one of the three candidates, to become Myanmar’s next president.

Albeit a low profile player, U Htin Kyaw is a graduate majored in Computer Science from University of London and also an author under the pen name ‘Dalaban’, named after a famous Mon ethnic warrior. His father was a national poet and an NLD lawmaker from 1990 election nullified by the junta while his wife is a MP representing Thongwa Township in Yangon region.

U Htin Kyaw’s nomination was, however, a sudden push into the spotlight. He was tipped to be president by many locals but hardly by any international analyst.  While international reporters reacted swiftly to provide full details on U Htin Kyaw, the absence of an immediate official press release by NLD and inadequate coverage from the local press have led the international press like AFP to assert the word ‘Ex-driver of Daw Su’ as a trait of U Htin Kyaw which was very vexed by the locals.

The enragement of NLD’s supporters was further fuelled by the condescending sneers and vulgarisms of the hard oppositions expressed substantially on social media.

Egregious usage of the word ‘driver’, in the eyes of NLD supporters, was cooked up by an AFP Reporter, which made AFP probably the first and one of the outlets in initiating the ‘driver’ angle, while CNN has made its worst flawed coverage ever on NLD’s nominees.

(http://news.yahoo.com/ex-driver-gears-myanmar-rule-suu-kyi-still 060304355.html), another article by AFP headlined with ‘Suu Kyi’s former driver nominated for Myanmar president’ by the reporter, Hla-Hla-Htay took inauspicious failure to the claim of her colleague, Jerome Taylor, who insisted the usage was not an insult to U Htin Kyaw.

Jerome said in his other tweets that AFP stood firm with its standard and even sought independent confirmation on the Oxon degree of U Htin Kyaw, which had not been verified at that point in time although numerous outlets reported in U Htin Kyaw’s biography. In another tweet, Jerome explained his insistence of the apt usage of the term, driver in his own words as ‘The driver line is a nice way to illustrate how Suu Kyi has chosen an inner circle, close confidante to be her proxy.’

The AFP’s amendment of the headline of this article (http://news.yahoo.com/suu-kyis-former-driver-nominated-myanmar-president-035833630.html) appeared on Yahoo News was also questionable as it seemed that AFP is reacting to public criticism. 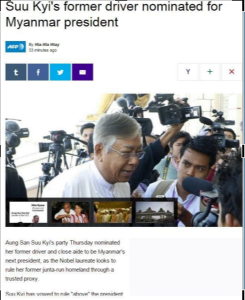 AFP’s article appeared on Yahoo before its headline was amended

Along the way the most unpleasant thing for NLD’s supporters is that their haters took the term ‘driver’ as a trait of NLD’s presidential nominee, while the emergence is being considered by NLD’s supporters, as an answer to their long-awaited question of who will be the next able-body after Daw Aung San Suu Kyi.

It is astonishing that why AFP chose the term ‘driver’ to illustrate U Htin Kyaw’s closeness to Daw Aung San Suu Kyi though the capabilities of AFP’s journalists are unquestionable since they have journalists like Jerome, an Oxford graduate with decent beard.