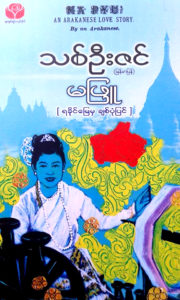 There were three Anglo-Burmese wars. The first Anglo-Burmese war broke out in 1824 and according to the Yandabo Treaty signed in 1826, Burma had to accept an agreement giving up her influences in Assam and Manipur and had to agree to surrender the Arakan (Rakhine) and Tenissarim (Taninthayi) provinces to the British. After the second Anglo-Burmese war which broke out without any declaration of war in 1852 and ended without a peace treaty, the British declared one-sidedly that Lower Burma below the latitude line crossing the town Thayet became British territory.  The last war in November 1885 also broke out without any declaration of war, but the British captured King Thibaw, the last king of the Konbaung Dynasty, Chief Queen Suphaya Latt and Minor Queen Suphaya Lay.  They banished the Burmese Royal Family to exile at Ratanagiri near Bombay and proclaimed that entire Burma became a British Colony starting from 1st January 1886.

One may wonder whether there was no novel in the Burmese literature before Burma became a British Colony because the novel “Maung Yin Maung and Ma Mai Ma” published only in 1904 is considered to be “the First Novel of the Modern Burmese Literature”!!  In fact, there were enough novels, which is called “Wuthtu” in the Burmese Literature before British annexation of Burma. One type of those “Wuthtu” was mostly based on the love stories among royalties and aristocrats of the Royal Courts, which is called “Nantwin Wuthtu” or “Htoe Zat” in the Burmese language. The other type was the translation of the Buddhist Jatakas from Pali language into Burmese.  This type of “Wuthtu” is called “Zattawgyi Wuthtu” (Jataka Vatthu) in Burmese.  However, a book like “Maung Yin Maung and Ma Mai Ma”, a love story between commoners, was the first published novel in the Burmese language.

In fact, there was a Modern Burmese Novel written in English language and it was published six years earlier than the novel “Maung Yin Maung and Ma Mai Ma”! In 1898, an educated Arakanese (Rakhine) wrote a novel with the title `Ma Pyu: an Arakanese Love Story´.  The book was published by Hanthawaddy Press, Rangoon, in 1898.  It was a love story.  In that love story, the author described the traditional way of life of the Rakhines, the culture due to their confession, Buddhism.

Since Arakan became a British soil in 1826, seventy years later in 1898 there were many educated Arakanese (Rakhines) who could read, write and speak English fluently. The same thing happened in Upper Burma 50 years after the annexation.  In the 1930’s and 40’s many Burmese were proficient in the English language and literature.  Some Burmese authors were mainly scholars of English language and literature. Dr. Htin Aung (pen name Maung Htin Aung), U Khin Zaw (pen name K), U Khin Maung Lat and Daw Khin Myo Chit belonged to these scholars and therefore most of their contributions were in the English language.

Definitely sure, the author of “Ma Pyu: An Arakanese Love Story” was from the elite class among the Arakanese, who knew English language and literature better than Arakanese/Burmese language and literature. Unfortunately, nowadays nobody knows who that author was, because even for his pen name he just used “an Arakanese”.  In any case, “Ma Pyu: An Arakanese Love Story” must be considered as “the First Burmese Novel written in English language. I am very proud of that author because he was my compatriot.

In the same way, I am also very proud of (U) James Hla Kyaw, the author of   the novel “Maung Yin Maung and Ma Mai Ma” which was recorded as “the First Novel of the Modern Burmese Literature” because he was an “Old Johnian” like me!  (U) James Hla Kyaw went to the then St. John’s College in Rangoon at the third quarter of the 19th century.  I attended the then St. John’s Diocesan Boys’ High School, Rangoon, in the 50’s and matriculated in 1961.  So, I have reasons to be proud of both authors.

Both authors belong to my great-grandparents’ generation.

View this document on Scribd