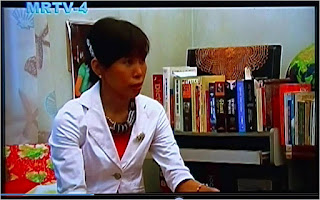 (I was interviewed by MRTV4 in my country and it broadcast on 2nd January of 2012. This photo was taken when it broadcast. It was my first interview since I had been a writer in 1996. I was excited at  that time. I felt happy that I had a chance to say about my family.)

One day I accidently visited the web page of my interview (subittles in English)on youtube, I found that there was 1 dislike. At first I was surprised to receive this information. I have never received such a response before.

In our modern world, the technology was more and more advanced and no one can follow all. But easy to know our writings like or dislike from our readers was the thing that creation of our technologies. It was an amazing thing.

When I created my account on Face Book, I had gained almost 80 people fan of my writings. I was satisfied myself with this result. But I could not update my posts regularly and for many other reasons, I cancelled my account and I temporary quit from FB. During those days of my experience in FB, I was happy with the function of ‘Like’ that created from FB for the readers could vote our writings. But no one could have a chance to show their ‘dislike’ on our writing and photo. At that time, I wondered if no one voted ‘Like’ under my writing, it meant that there was no person who liked my post?

If we voted ‘Like’ for the first time, it was changed ‘Like’ officially with our account and everyone saw it. But we saw ‘dislike’ under the post. It represented that if you changed your mind, you could click ‘dislike’. Then, the ‘Like’ was disappeared and the functions were displayed as already as before. No one knows; you ‘dislike’ it or you changed your mind except for the one who could notice your changement by seeing your movements.

BUT, now at ‘youtube’, we could receive who liked and who disliked. This information was special. How could we, (especially for me; a writer), have a chance to know who dislike the posts? In our new technologies, it fulfilled our desires. FB only showed and accepted who ‘like’ the post. Everybody could see who showed it’s ‘like’ in FB. But in youtube, the viewer could only see how many people like or dislike it. For example, we see ‘1 like’ or ‘2 like’ or ‘1 dislike’ or ‘2 dislike’. They were just numbers. More precisely, we only received how many people ‘like’ or ‘dislike’. It was a little disappointment that the viewer could not see who show it’s ‘dislike’ secretly.

Yes, ‘like’ is more expected response than ‘dislike’. I admitted that I preferred ‘like’ to ‘dislike’. But as for all my readers, I had to admire and honor to the reader who did not like my post or my interview as the same as who liked it.

It was hard to receive that kind of response ‘dislike’. But I am honored to know that someone shows their ‘dislike’ openly. It is much better than being ignored.