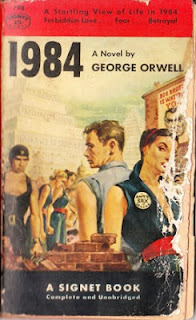 When I read this book, I wondered and thought that who was behind the screen? Everybody in this book acting as actors and actress played in different role and they were seemed very important part of their work. But the author never mentioned about the master mind behind the stage or about the director who controlled all the players of his story. I thought I could find the Master Mind after finished this novel?

George Orwell wrote this book in 1949 and the story seemed that he foretold what would happen in 1984. In this story, ‘posters the party leader, Big Brother, bearing the caption BIG BROTHER IS WATCHING YOU attack the landscape, while the telescreen all over the places monitors the private and public lives of the public.’

We easily see in the novel the social class system is threefold: the upper class, the middle-class and the lower class, who make up 85% of the population and represent the working class. They played their parts respectfully and obediently under the rule of the government. But we never see the superior of the government. The party seemed to be the players of very important parts, but they were not the true authorities. The members of the party were just the players of unseen leader. The party who controls the population through four important government ministries: Ministry of Peace, Ministry of Plenty, Ministry of Love and the Ministry of Truth. I never saw the true director behind the screen until I finished the novel.

We will never know the Big Brotherhood really exists or alive until the story ends. It remains an unsolvable riddle in the reader’s mind. The torture session, imprisonment, dead sentences using from the Brotherhood methods passed through all the prisoners forced to betray their love and attachment without regret. ‘Learning, understand and acceptance’ is the only solution to escape from the torture.

It might be reminded the reader the Party really exists in the world or we could find out there might be Master Mind who rule the world without knowing his identity to the people? The author only portrayed how the system played by the Big Brother governed the country. 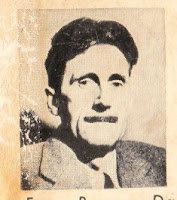 The author asked this question to the reader through reading his novel until the end as ‘Which One Will YOU Be In The Year 1984?’ He said ‘There wasn’t be much choice, of course, if this book’s predictions turn out to be true.  ….’ The reader wondered which one will I be in the year 1984?

What Will Be, Will Be

George Orwell wrote this novel in 1949 and he declared that his novel was ‘A prophecy of the Future or coming 1984.’ My grandmother, Khin Myo Chit translated this novel in 1984. But unfortunately her translated book was not allowed to appear.