My brother started to write articles at the AtwayAmyin monthly magazine while he was attending the Engineering Institute. He soon became a young writer (also a cartoonist), and became a star in the family. Most of our grandparents’ friends applauded him. Some of them looked at me, and said,

‘Why don’t you write like your brother? You are his twin sister, isn’t it? All the family members are writers except you. So, write something like your family.’

I was angry whenever I was told as. I was convinced myself that I would never be a writer as they wished, Never!

(My brother became a young writer, and he looked smarter with his pen. ‘A pen is deadlier than the sword.’) (Illustration – Maung Yit)

One day, a friend of our parents from Taung Gyi (Southern Burma) visited to our house, and paid respect to our grandparents. He donated to writers, young or old, 200 kyats for celebrating his birthday anniversary (in 1991). All my family received his gift except me (because I was not a writer). I felt, for the first time in my life, I wanted to be a writer like my family (because I wanted his gift). But he came to me, and smiled, and gave me 200 kyats. He said, ‘Here, my little girl, uncle gave you this, because I believe you will become a writer one day. So, you take this, and it’s the promise that you will write yet to come.’ I, …. I accepted 200 kyats without thinking! When he left, I was regretted for what I had done. I did not want to be a writer. ‘I never will write!’ 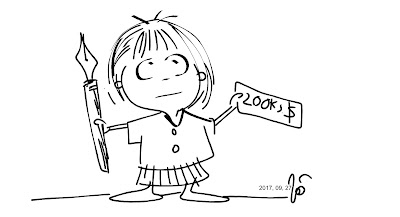 Since then, my family teased me, ‘She takes 200 kyats from our friend. It means she made a promise to write one day. Ha ha.’ Grandpa knew that I was upset. He comforted me,

‘It’s ok, my dear. Don’t be serious. The essay you wrote at the school also be done.’