The Taming of a Mathematician

I was stupid through my school life. I could not get good marks in every subject. In every 3 months, 3 times per year held the minor test in school. I was included in a group who had failed three times (continuously) in one or more subjects, and was chosen to call one of their parents to meet their teacher. My twin brother had good impression on all the subjects for both his teachers, and our parents. He even got Distinctions in Mathematics, English and Science. His positions were first or second in the class when I was at the bottom. But he was also one of students who asked our parents to meet for his misadventures at school. He could not really be called mischievous, but he got into many kinds of troubles that boys used to. 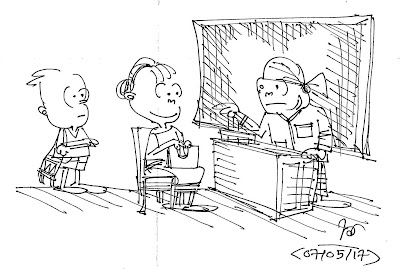 (Mother met his teacher for his misadventures at school. The teacher said, ‘He never got into a fight. But he like to watch a good fight and shout praises, … that got him into all kind of trouble….’)(Drawn by – Maung Yit.)

I was not upset, and disappointed for my stupidity at school. But I had fear on the day to show my poor paper(s!) to my parents for having the signature. Moreover, I also had fear when my teacher gave me warning to bring one of my parents to meet her/him tomorrow. At that time I wanted to run away from home. But the D-day was over, I felt comfortable, and thought about to play more.

Here, I recalled the memory …

I was very quiet and never gave trouble to anybody as my father said, but my father had to meet my teacher for my poor performance in mathematics when I was in 6th standard (at my sixth-grade) at school. He did not want to see my teacher. He was proud of himself as a mathematician and he was afraid if the tutors at the University found out about his daughter’s poor performance in mathematics? But it was his duty to meet my teacher. 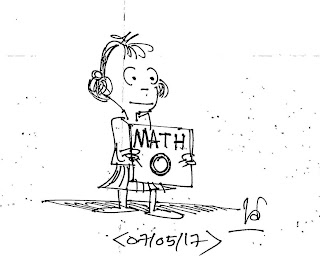 (I was afraid to show my poor paper to my parents. ‘Zero is not empty. It has value.’) (Drawn by Maung Yit.)

My teacher complained my father that it was the third time I had failed in mathematics and she told him about my carelessness. She said I was not stupid and I knew when to add or multiply but I did them wrong. She also said I had copied wrong – 25 instead of 55. She told again that I did it so badly at the beginning.

My teacher continued, ‘Look how your daughter has constructed a right angle. Can you imagine anyone constructing a right angle, 45, 60, and 30 degree using protractor?’ She continued ‘To construct a right angle, all you have to do is bisect a straight line segment, which measures two right angles, by using a compass and ruler, you get 45 degree. To construct….

(She continued her speech about using compass and ruler to find out 60, 30 degree and so on) My father said, ‘but is it mentioned in the question that all constructions are to be done with ruler and compass?’ She replied, ‘Of course not. That’s to be understood. The way some parents try to justify their children’s doings. It’s really amazing.’ 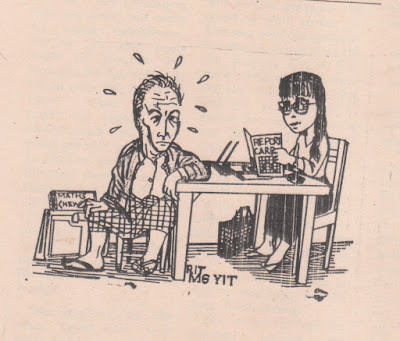 (I know what my father was thinking as ‘Understood? Understood indeed?)

I know what my father was thinking as ‘Understood? Understood indeed? That’s what intuitionists say. But Pure Mathematics does not accept Intuitionism. It accepts Formalism, which means taking nothing as understood unless stated so at the beginning.’

That was what he wanted to say, but he didn’t. After all, he knew that he could not teach Formalism to high school students. He thanked her for the welfare of his daughter and left.

After that, my father called me and showed me how to instruct a right angle 45, 60 and 30 degree using a ruler and compasses. I had faced similar problems between my teachers and my father during my experiences of my school and University life. The problems which I met were not only the same as I met when I was in High School, but also were as higher as the level I reached. I had to obey the rules that my teachers made for having good marks in examinations and I had to listen the formalism of our pure mathematics of my father for having full understand the mathematics theories and problems. Luckily, I was not too young to call my father for meeting my teacher as I was a school girl. So, I myself was to be obedient between my teacher and my father until the time I would obtain my M.Sc degree.