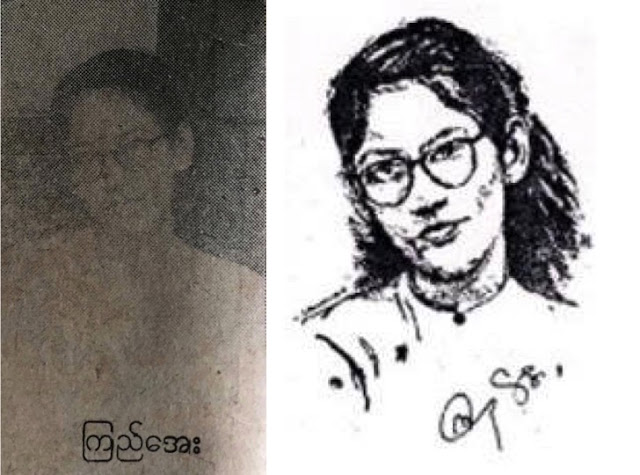 (A photo of Kyi Aye (left), and the sketch of her (right), the artist – unknown)

A very rare woman poet in Burma, Kyi Aye, an old friend of my grandparents, once lived together at Aye-Yeik-Tha in the year around 1950. She was at that time, a Rangoon University student attending a bachelor of arts. She later studied at University of Medicine, and became a doctor. My grandma and she were closed friends. Grandma admired her because of her strong ambition in the education, and her beautiful literary works and her own successful household life with 8 children (including a pair of twins.). Grandma and she discussed about literature for a long time until she left Burma (1970?).

Kyi Aye had been already writing poems and romance since her high school. Her romantic poems were famous for not only her writings, but also for the artistic feelings themselves. While I was reading her poems in my younger days, I thought Omar Khayyam was reborn as our poet, Kyi Aye in Burma. Her famous Myanmar poem, – ‘The Night I Cannot Sleep’ in Burmese, was still the most popular poem. It’s popularity can compare one of the short four verses of Khayyam; ‘A Loaf of Bread,…thou beside me,…’

Her selected words were gentle, simple, and calm. I was proud to say that the beauty of our Burmese poetic languages was found in her writing. Unfortunately, I could not dare to translate her poems into English without destroying her poetic sense, and sensibility. So, let it be. … I would say that we are lucky, because we could taste the new Khayyam’s tongue in the 20th century. 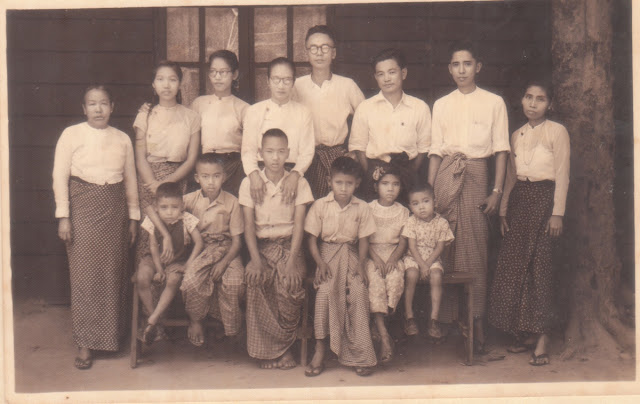 (An old photo of Aye-Yeik-Tha group. My grandparents were standing in the middle, and my father, sitting in front of my grandmother. Kyi Aye stood at the right hand side of my grandmother, Khin Myo Chit – writer of Colourful Burma.)

Kyi Aye passed away in 28th December 2016 at the age of 87. I had never met her in my life before. I only saw her at Aye-Yeik-Tha photos from my grandparents. She looked slim, simple and plain as her poems hold. Her big eyeglasses showed the way of an educated woman. Her Burmese fan must remember her, especially her famous verses, ‘The Night I Cannot Sleep’. I wondered if she was born again as a poet in the next life, I would wish to hear her new poems alive in the 21st century.