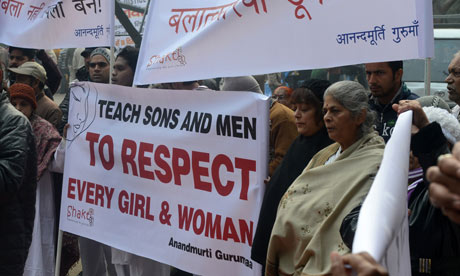 Does media influence society or is it society that influences media? Social and cultural theorists have argued for both sides of the debate in regards to this question. Perhaps, instead of thinking media and society as either only a cause or an effect, the relationship between media and society can be thought of as cyclical. There is no beginning or end; both are constantly influencing each other and those exposed to them.

People today are always being presented with copious amounts of data, information, and opinions, through newspapers, magazine, blogs, and online sources. This immersion into media causes people to absorb whatever messages are being broadcasted. Although one can argue there will be different interpretations, the messages will still be heard and as a result, resonate throughout society. Media has the power to popularize and depreciate values.

In the past, sexism was incredibly prevalent in writings, films, and shows, demoting many people and providing misconceptions. There have been progress in addressing legislative issues and the glass ceiling, a concept used to describe a barrier between women and advancement in their career. Over time, progress for women have meant gaining the right to vote to having equal pay.  Even as society moves forward towards equality, women still are not equally represented in media as men are. Representation in media is important, because it affects the expectation people have of women. An inaccurate portrayal of women in media today is discriminatory and promotes false stereotypes.

Gender roles are still prominent and can be seen anywhere from television commercials to a box-office movie. The Bechdel Test, created by Alison Bechdel, a social commentator, is a method to evaluate if a movie shows an active presence of women, consisting of only three criteria. In order for a movie to pass the Test, the movie must have two or more named female characters who speak to each other about something other than a man. The objective of this test is not to distinguish between feminist and misogynist movies, but rather to distinguish between movies that portray women in scenes without a male influence and movies that do not. Despite its simplicity, many supposed great movies and popular movie franchises, including The Dark Knight trilogy, Marvel’s The Avengers, War Horse, The Lord of the Ring series, and Disney Pixar’s Up do not pass the Bechdel Test.

The lack of an active presence of women in popular movies conveys a message saying women are unimportant unless their lives revolve around a male. Most female characters in entertainment are reduced to the role of the mom, the wife, the love interest, or the friend, all of which defines her by her relationships with other male characters. This reiterates the false notion that a woman’s sole purpose is to be there for men. Women are being presented as inferior to men, seen rarely speaking or in limited roles.

In interviews, actresses who portray female heroes, such as Anne Hathaway as Catwoman in The Dark Knight Rises or Scarlett Johansson as Black Widow in The Avengers, are more often than not asked about how they were able to fit into their outfit for the movies. Their male co-workers, however, are instead asked about their characterizations in their respective movie. Both the actresses and the women they portray in the movie are no longer seen as characters with a story to tell, but as a sexualized object for men to enjoy. The sexual objectification of women in media contributes to rape culture, a concept for a culture in which sexual violence is seen as the norm.

Surprisingly, media intended for younger viewers also include instances of misconceptions about women. When examined closely, Disney’s Beauty and the Beast, a film many are familiar with and is still popular today, promotes dysfunctional relationships.  The Beast fits the criteria of warning signs for domestic abusers. For example, he confines the female protagonist, Belle, in his home and controls her lifestyle. In the end, the Beast is changed back into a human being, because of Belle’s love for him. Beauty and the Beast is telling its viewers is that it is the duty of the abused to love the abuser in order to change the situation for the better. This prospect puts the blame upon the victim, another contributor of rape culture.
In society today, little girls are told a boy likes her if he “pulls her pigtails” and is generally mean to her. How is the little girl supposed to know the difference between abuse and love when she becomes a woman? The way a woman is perceived in media is significant because it will affect the way she is perceived in real life. If media continues to represent women in belittling and objectifying ways, the effect this situation will have in society is ultimately dangerous.

A more accurate perception of women in media will catalyze more accurate representations of other groups, such as the lgbt* community, as well as people of colour, leading to diverse representations of people in media.  Ultimately, media should send messages of empowerment. Instead of belittling people for being different, diversity and equality should be embraced. Media must tell society there are no limitations because of who you are. Being a certain way can define you, but in great ways that will help you reach a multitude of accomplishments.

There is no doubt media plays a significant role in influencing one’s perception of other people. Distorted representation of women in media can lead to misguided and dangerous misunderstandings about women in real life. Females are often sexualized and objectified in many forms of media. Video games, such as the Lara Croft franchise, often contain female characters wearing tight and revealing clothing in order to appeal to the male audience. Almost every comic book cover features strong female heroes in sexualized poses, wearing impractical clothing. Male counterparts of female characters in videogames and comic books, however, are never portrayed in such ways. Research by the Geena Davis Institute finds 36% of women wear “sexy attire” in prime-time programs, a contrast with 8% of men who do so. This depiction of women in media sends the misleading message that women are objects to be sexualized.

Of course, the inverse also applies in this situation. Positive representation of women in media will promote women in prominent ways. There are great examples of strong female characters, as well as media featuring an active female presence. These types of films are empowering and demonstrate to girls and women that they are individuals, who can define who they are for themselves. Mae Jemison, the first African-American female astronaut, was inspired by Sally Ride and Uhura, an African American female Lieutenant in Star Trek.  This is a great example of media positively influencing society.

← With 2008 constitution as foundation, Burmese democracy drawn in shallow water – by Cartoon Ku Mo Jo)
The Law belongs to them in Burma – Cartoon Saw Ngo →