In June 2011, the Burmese site Mizzima.com, compiled the views of several well-known Burmese on the fighting between the national troops and the Kachin Independence Army, after both sides suffered heavy casualties. Aw Pi Kyeh commented, “The president said they would try to be a good government. What does good government mean? Is fighting good?”

After 30 years of cartooning, Aw Pi Kyeh says he will not quit. He continues to illustrate despite the ban on his work, and he has turned to new channels of distribution such as Facebook.

SAMPSONIA WAY: How did you begin as a political cartoonist?

APK: I have loved cartoon drawings since I was 9 years old and began copying them. Then I discovered editorial cartoons in newspapers: Not only pictures, but ideas! So I began sending some of my own cartoons about current events to newspapers, but without success. When I reached university, though, my work achieved campus-wide fame. In 1980 editors of magazines began to print my cartoons, and I was given a monthly platform. But at that time in Burma, editorial cartoons were published strictly for propaganda. As soon as I was seen as having new ideas, I was not asked to draw regularly, and in fact I was appointed as an engineer in a factory that was far away from Yangon, where there was no post office. So in 1988 I resigned and became a full-time freelance cartoonist. 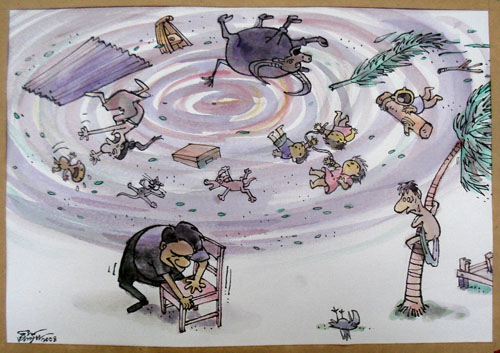 After Burma suffered the loss of more than 138,000 lives and damage estimated at $10 billion in Cyclone Nargis in May 2008, the Burmese military regime held a referendum to retain its power. The cartoon depicts a man in trousers (a symbol of a military person) carefully righting his chair (a symbol of power) while ignoring the plight of victims being blown about in the cyclone.

SAMPSONIA WAY: What challenges have you faced as a response to your cartoons?

APK: The crucial challenge is censorship. The Press Scrutiny and Registration Division (PSRD) reads all published books, newspapers, and magazines and censors any pages they don’t like. Publishers and editors need to tear out or ink over those pages. All my cartoons were chosen to be published in magazines, but some were censored. Whenever a page with my cartoon on it is torn out, the cartoon on the back is also tossed out. The editors must allow the PSRD to check their publication again after the deletions. It can take more than a week and delay distribution. So I am a major headache for my editors. Though they would like to publish my work, I am the cartoonist most prone to censorship. I’ve had about 300 of my cartoons cut out of publications in my career.

SAMPSONIA WAY: Have you ever come close to giving up the work because of the difficulties imposed on you?

APK: No. After I resigned from my engineer job, I was determined to be a freelance cartoonist for the rest of my life. I have tried to survive economically, even with a wife and three children. When my cartoons were censored, sometimes I was not paid, so I have also done cartoon illustration, computer graphics, and animation related to cartoons. From time to time, I worked as an external supervisor for some NGOs in creating information, education, and communication materials. Now I draw cartoons not only for criticism but to inform and educate the Burmese people. Cartoons are an easy, effective tool for this purpose. I am particularly interested in using my cartoons to promote environmental issues, disaster management, and early-childhood development. I would never give up my cartoon work because I have so many goals to achieve that censorship will not impact.