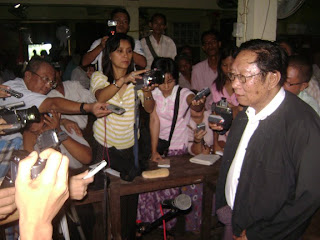 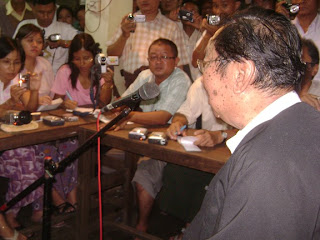 Defendants’ lawyers made their case today at the court house inside Insein Prison for Daw Aung San Suu Kyi and her colleagues. The court however later decided for next hearing to coming Monday. According to NLD’s press conference, Daw Suu told her lawyers that she was disappointed with the way the court was handling the trial delaying their verdicts and process. She also told U Nyan Win, her lawyer that UN should criticize 2010 Election on the ground that the junta’s total ignorance on Burma national reconciliation.

One of the senior party leader and former political prisoner, U Win Tin and supporters of Daw Suu gathered in front of the Insien Prison gate to show their solidarity for Daw Suu. There were 100 of the supporters and also equal numbers of thugs backed by the authority and armed security to scare the gatherings, witness told MoeMaKa. Despite weak heart condition and eye sight, 80 year old veteran politician and senior newspaper man, U Win Tin never failed to show up at the gate of Insein Prison at every court hearing since day one, some witnesses remarked.